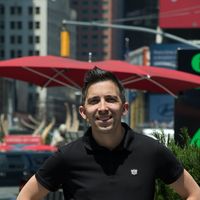 Trying to live the best life I possibly can...

I enjoy meeting new people, and have the slightly optimistic viewpoint that at the end of the day we're all far more alike than we often admit. I enjoy participating in communities like CS as every new connection breaks down another barrier in this world.

I've been fortunate enough to meet a wide variety of people, and I don't think I've ever met anyone that I haven't gotten on with on some level, or found some common ground!

If all else fails I just talk about sport (mainly football), language isn't a barrier when discussing the beautiful game!

I believe in living a purposeful life, with definite aims and goals. Living for the moment is fair enough if you've got great people around you. But once they move on you're gonna need something to keep you busy!

I think people should take responsibility for their own futures, and help each other to have the confidence to do whatever is necessary to ensure each others futures turn out how they want them to.

I love the idea of hosting surfers from all around the world. I began to do this in July 2011 and have found it to be even better than I imagined. I moved to Granada in 2018 and no longer have any room to host people, but I still enjoy meeting people and showing them around.

I have enjoyed being part of the CS community in Málaga, Spain, since July 2010. I'm very grateful for all the new friends I have made since joining, many many good experiences, no bad experiences at all.

Oasis are my favourite band. Kasabian are great too.

I love comedy movies... so Dumb &amp; Dumber, You, Me and Dupree, Knocked Up, that kind of thing!

Witnessing the Ashes tour of 2006/07 in Australia was amazing (cricket). England lost 5-0 but I was at most of the games, and really felt part of something huge. It was my first major trip overseas on my own, and ignited a passion for travelling and 'meeting the world', which has led me to hosting people through this website.

I can give tours of Granada
I can give advice on travelling in Spain &amp; Europe