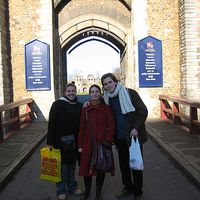 To prevent an evil billionnaire from destroying the world, by order of Her Majesty the Queen. But shh, it's top secret.

C: I love travelling, but I don't like hotels. It's not half as fun when you can't meet people on the way.
I spend most of my time behind my computer, drinking tea. That's not because I'm a computer addict, but because that's where I write my article, my thesis, and my (unpublished) stories... The rest of the time, I enjoy little relaxing pleasures: walks in the city, singing songs, or figuring out what I'm going to cook from the remaining two carrots and one egg in the fridge.
I'm an eager environmentalist. I've decided to avoid taking the plane as much as I can in the future. Not that I get angry at people who still do take it!
S: I also support environmentalism as well as fair trade, and I have been an activist for both, which I intend to take up again in a few years. In my free time, I read a lot, practise sports, play role-playing games and listen and play music, especially flamenco. I'm also a big rugby fan !

C: The same as the cat's. He got it right.
S: The same as "the great Gatsby" : self-improvement... with occasional doubts.

We'll be happy to welcome people in our home, and also to show them around and get to know them a little. This isn't just about saving money when you travel!

We'd also love to stay with other people when we travel, to share experiences from different corners of the Earth.

Hard to sum up in one paragraph.

Saving the stories for our upcoming conversations ;)

C: I can teach how to play a little bit of piano, a few cooking tricks, how to knit somewhat, how to crochet, how to play a song by ear, how to recognise some of the plants that grow around here...
I can draw a little bit, but if someone can teach me more, I'd be grateful.
S: Basically, I can teach anything I listed in my interests, and I would like to have some help about drawing and learn more about art and philosophy.