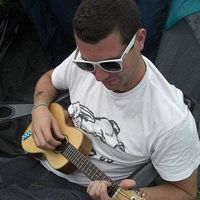 3 years ago I had the idea to break the World Record for the longest ever taxi journey, so that's what I am doing now!

As part of a 3 man team, We're driving the longest route (to rack up the fare like all good cab drivers) around the world and plan to meet as many interesting CSers as possible on the way.

Loads more details on the expedition are on here www.itsonthemeter.com

If it doesn't make me giggle, It's probably not for me.

I'm gutted that I've discovered CS whilst I am homeless, when I finally get a place, you're all invited!

Been couchsurfing for the past year all the time, mainly through my travel buddies' accounts though

Too many to list, eclectic tastes though, focusing on originality or just sheer class

Last year, I met the real Santa Clause, got deported from Iran, was arrested in Moscow, drove to Everest base camp in Tibet and broke two World Records. The year before; I had a real job.

If you fancy learning about how to drive a 20 year old black cab around the world, I'm your man. Quantum physics.... not so much.