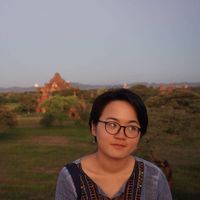 Hey, I am Qian (pronounced like Chan). I am a political science major. Currently I am about to start my first job back in Beijing, China. I am excited to explore this city:)

I am lucky to have had the chance to study, travel, and live in different regions in the previous years. So far the experience include one semester in South India, one in Jerusalem and two years in Budapest; I had internships in Northern Myanmar and Vienna for some months and lived in Pittsburgh for a short while.

I am looking forward to what could be next, and also very much willing to share and learn more about the world:)

I often find meeting new people help me understand more about the world, the people living in it, and me myself. CS is a great idea and my experiences with it so far are wonderful so that I would like to continue :)

remixed myself while living in a quiet mountain town in Myanmar.

Would like to learn: almost everything! esp a bit of a new language, since I have this annoying habit of using the small phrases from different languages that I cannot speak xD

Some facts within my scope, some ideas and opinions, and my primitive cooking technics :P