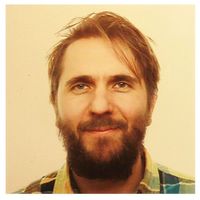 [ Even though I still host via corporate CS, I recommend people to use www.trustroots.org or www.bewelcome.org - these are non-profit, community driven and open-source hospitality networks! I am also a member of www.hospitalityclub.org which is probably the oldest, although less flashy and somewhat obsolete hospex community. ]

In short, I like simplicity of things. Sharing. Sincerity. I make a lot of mistakes in my life but I really try to notice every single one of them and make sure it won't happen again. I like to see happy beggar's eyes when I give him a penny. Believing in good is very important to me even if there is nothing good left around.

Some random personal facts:
- Vegetarian since 1999, vegan since 2001
- Playing gitarr, piano and accordeon
- Regularly running, sometimes playing basketball
- I live 3 km away from Järna, 50 km south of Stockholm - and my son lives with me every now and then
- Together with some activists I have started a NGO Animal Rights Lithuania where I also served as a board member, check out www.animalrights.lt - in addition I am also a chief editor and author of www.vegan.lt
- I have had a vegan rawfood cafe before but gave up on it after 1,5 years ;)
- Most of my life I was a big sceptic and believed only in what peer-reviewed science proves right; lately I have been trying to keep an open mind though, opened myself to spirituality, started meditating and doing yoga - and it feels so right!
- I like keeping myself busy, check out https://sites.google.com/site/romualdbokej for more info

Hosted and been hosted by hundreds of people - stopped counting long time ago. Quantity is not quality, of course, - but it makes me happy to help others with the lodgings. Peace and brotherhood!

Many favorites! See https://sites.google.com/site/romualdbokej for books and movies.

- Was at the end of the world: in January 2002, I hitch-hiked &amp; hiked to the northernmost point (Nordkapp) in Europe, while my tent was my home, and most of the food I ate I carried on me, while no money were used for the trip.
- Hitch-hiked a lot before, stopped counting after 100'000 km - now I enjoy giving back, picking up hitch-hikers every now and then
- When I was young, I was arrested once, and driven in a police car with handcuffs on (because they caught me sleeping where I was not "supposed" to sleep, in some under-construction hotel in Switzerland);
- I have seen my kid being born!
- I've run Half-Marathon (21 km) quite a few times. In 2015 I even did it barefoot.

Fate led me somehow to certain decisions in my life, and these desicions turned everything around and in many ways made me swim against the current. One of those "life decisions" was an agreement (between me and myself) that respect to life should be followed with a respect to all earthlings that are to be born free, live free and die free. This in its turn inevitably led me to accepting a strict form of vegetarianism, known as veganism, as the most humane way of living (even though I do not like labels and -isms). Following that I became heavily involved in vegan education and eco- and animal rights activism whereas the accepted view somehow spread further into my family where both of my brothers turned veg*ans.
At the moment I consider myself an animal rights abolitionist (Dr.Gary Francione's views) because I find following reasons to be too strong to ignore: 1. ethical (respect to life, compassion); 2. environmental ("one can't be a meat-eating environmentalist" - probably many of us have heard that), 3. prevention of world starvation and saving limited Earth resources (did you know that to produce 1 kg of meat you need much more land, water and energy than if you produce grains and vegetables?.. that for the production of each kg of meat one needs up to 7 kg of grains which otherwise can be consumed directly by human?); 4. health (every respectful health/dietetic institution can inform about the benefits of a plant-based diet).
I believe (and I have many arguments for that) that we err by being so selfishly abusive towards the earthlings and our planet in general. For me, animal rights is not some belief like Biblical stories, and not some faith in possibility of something to exist or not (is there God? is there karma and samsara?), animal rights surely can be seen as a clear concept based on reality facts, and furthermore can be considered as a moral and logical statement with a certain level of simple compassion intervened. Humans have developed to be the most wicked creatures on this planet - but does that give us the right to exploit and manipulate everything and everyone in order to satisfy our never satisfied wants? In my personal opinion, no.
Having said that, I am not an aggressive rupor for this philosophy - I like to discuss the topic with open-minded people on occassions but I am not going to become a bewildered lunatic who would only talk in "Jesus is the only way!"-fashion.

Probably one of the number ones for me is a renunciation of all earthly pleasures and letting go of my Ego - in this way I hope to immerse in love and care towards anything around us. Simplicity is the key. :) Wise are Buddhas words: When fishes are few, the heart is happy; when craving ends, there is peace.