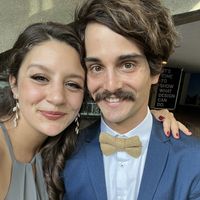 Currently traveling with my fiancé Jeff back from a wedding that I was the best woman in in Washington DC. On our way to the east coast we mostly camped in our built out truck and stayed with friends, but we don’t know many people on our southerly route home and would love to learn more from locals!

I am from California and still live there in the coast between Santa Cruz and San Francisco. My partner Jeff is originally from Florida, but he came west more than a decade ago. We work for a small nonprofit that provides educational opportunities in the outdoors for under resourced communities. I also work for a resource conservation district on climate and habitat restorations projects.

This past year Jeff &amp; I took a sabbatical to helpX in Hawaii, and then run backpacking programs in the Sierra. We are returning to jobs in California in November.

I like to spend my time in the outdoors; hiking, biking, naturalizing. I also like to cook, read, garden, build, write letters, do art, and just enjoy good company in whatever way it presents itself. Community is really important to me.

I've had some great surfers and some amazing hosts!

This is the Kit, The Shins, Cat Stevens, The Beatles, The Staves, Tallest Man on Earth, Mason Jennings, the Avett Brothers, etc...;

Hitchhiked from Spain to Germany in one shot. Don't tell my dad.