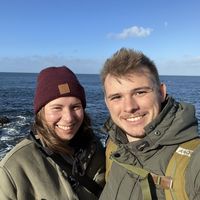 I made a promise to a friend to be with him in Istanbul over new year. Instead of just flying there I wanted to make it an experience and bought an Interrail ticket and try getting to know some of the countries I have never been at.
I have almost finished my masters degree in computer science and want to write an app during my trip as a kind of side quest.

A friend recommended it to me because he thought it would fit my style of travelling. This trip seems like the perfect opportunity to try it out and so far my friend is right.

I think everything can be made interesting by the right person.

My taste for music is all over the place from classical music while studying to rock/metal while in the gym. And while not doing anything I listen to classical rock.

My best holiday yet was in Albania because of the kind people. I tried to speak Albanian the whole time (with varying success) and met some friends which I am still close with today.

I love languages and would like to try teaching German (my first language) if you are interested. Programming is also a skill I could help with.

I can give you a hard riddle, teach languages (also programming languages) or show you why mathematics actually isn't boring and the education system is just lacking (in most countries).