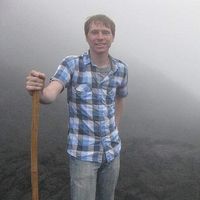 I'm traveling around the world! I want to meet people, eat delicious food, see the sights, have some fun, and get inspired.

I quit my job at a book publisher so I could just travel and work abroad instead. I blame Iceland.

I went to Iceland in Sept 2009 and it basically changed my life. I was only there for a weekend but had such an amazing time meeting new people and traveling, that I decided it was what I wanted to do. So I made a plan and 7 months later quit my job.

Since 2011 I've been living in Berlin, Germany - probably the coolest city in the world. I keep a regular blog about my travels and with my photography (and occasional video). Check out my blog here: http://travelsofadam.com

Passion is important. There's no point being unhappy as well. But I haven't worked out my own personal philosophy anywhere near enough to put it into words.

I've met so many awesome people through CouchSurfing and always look forward to meeting new and interesting people.

I probably philosophize too much. But generally, I like reading the Sunday New York Times, sleeping in unmade beds, wearing hats, blogging and Twitter. I love Twitter.

I like to talk about politics and news. I'm a bit of a news junkie, I guess. And even though I hate politics, I secretly love it.

BOOKS: The Unbearable Lightness of Being, Everything Is Illuminated, Harry Potter, Lord Of The Rings, Milan Kundera, Ian McEwan, Nick Hornby, Vagabonding by Rolf Potts

Since I've started traveling 4 May 2010 I've done a LOT of great things. I saw the sunrise on top of Mt Sinai, went snorkeling in Egypt, volunteered in Israel, visited my friend's wedding in India, lounged on a lot of beaches, celebrated a bunch of different New Year's celebrations (Yom Kippur, Diwali, Songkran...) and probably a bunch more things that I can't remember at the moment.