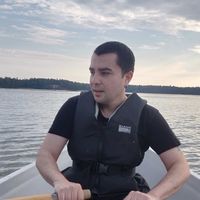 Please see My Home section before you send a request.

To find all the missing single socks in the world.

Now offering a couch in Kallio/Helsinki where I've moved with my wife. Book your couch before we run out of them. Yes, it's technically possible to run out of anything.

All about me in this tiny little box? Well... They would tell you that I'm as lazy as a rock. And sometimes I'm funny. With a fair pint of sarcasm. I'm one of the 7 billion human souls, hoping to reach their bed in one piece and call it a day. Which is a good thing because you're either bored or dead on this planet.

Have you read any works of Schopenhauer? If you have not, please don't. I've read them all and the strong presence of the will has turned me into a grumpy cat.

Keep your friends close. Keep your kidneys closer. They're no good when they get too far away.

I love to meet/host/exchange stories with wanderlust kings and queens who end up in Jyväskylä. Whether you are just passing by or decided to strike roots in a peaceful city, drop me a line.

I'm a hardcore gamer, beer enthusiast, hardcore reader (sounds better than "book worm" eh?), low-carb consumer, hardcore cat lover and yes of course, I like music. And my struggle with the accordion seems to pay off well. Above all, I'm interested in ideas, cultures, experiences, science, arts and the very existence itself. Yes. I'm ok with existing. Existing helps a lot.

I enjoy listening to post rock, hard rock, heavy metal yet and for some strange reason: Die Antwoord. There's also Gogol Bordello, Doors, Alphaville, The Smiths (and Moz himself), Goran Bregovic, Kulture Shock, God Is An Astronaut, The Smiths, Led Zeppelin, Sentenced, Travis, Metallica, compositions of Chopin and Bach, and stuff. The word "stuff" refers to a few million other musicians and songs.

And listening to Nirvana screwed up my youth.

Some of my favourite movies are as follows: Das Boot, Young Frankenstein, Wristcutters ALS, Ghost World, The Man From Earth and some independent movies in general. (I admit that I might have enjoyed Phantom Menace. But just a little bit.) etc. Then again, I'm the only person who likes Filth and Wisdom. And needless to say, I love Monty Python stuff.

I've seen things you people wouldn't believe. Attack ships on fire off the shoulder of orion. I watched c-beams glitter in the dark near the tannhauser gate. All those moments will be lost in time, like tears in rain.

Eggs and maybe some cheese, if asked kindly.