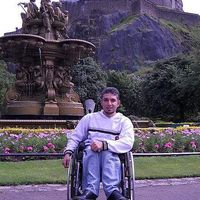 I love to talk! Give me good friends and good food and let the conversation flow!

Because I was living in an old historical city called Palmyra (in Syria) which attracted thousands of tourists every year, I used to help couchsurfers visiting Palmyra in different ways. I live in the UK at the moment and move between England and Scotland. I travel quiet a lot inside and outside the UK and I like to meet many local people or travellers during my travels.

Despite the fact that I am a wheelchair bound, I travelled to the six continents of the world. My dream would be to visit the last: Antarctica!