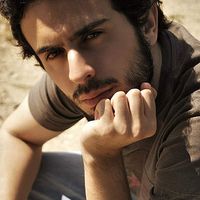 To know all places and things in the world. To learn the answers to all the questions. To be happy in a peaceful earth

I'm a person who connects very good with everyone. I always try to see the positive side of the things. I'm laughing and making jokes all the time, although I can be serious and responsible when necessary.

I do appreciate having my good friends around and they know they can count on me.

I love learning and thinking about any topic that comes up to my mind.

Happiness is the target that I (and probably all the people) want to reach. But everyone tries to do it by different ways. I have always thought that for me this way consists on three fundamental things: The first one is to love and to be loved in return. The second one is to live with dignity. And the third one is to learn as much as I can. I'd like to learn history to know the past as well as science to create the future!

I also think that people should take advantage of their time. We only live once and sometimes that scares me. What would happen if I died tomorrow? Would I have lived enough? Who would miss me? We'll never know that, but it would be so sad to be forgotten, wouldn't it? How amazing would be to be immortal!

I can offer my couch and my few time to have a coffee or whatever. In the other hand... I’m craving to surf!!

I had two amazing experiences in Couchsurfing. The first consisted on showing Madrid to Janna and Sanna, two lovely girls from Finland. In the second one, I hosted a colombian woman, when I was living in Lisbon. Apart from that, I haven't surfed any couch yet! I'm expecting someone to host me eventually and I'll be glad to keep helping everyone I could, here in Shenzhen =)

And finally the books: Ten Little Niggers, The Lord of The Rings, Dark Matter, La Sombra del Viento, The Pillars of the Earth, The Cave of Ideas, ...

Probably one of my best journeys was the Morocco's one. Two friends and I visited Casablanca, Marrakech, Ouarzazate, Fès, Rabat and Tangier during a week and it was really awesome. But I would like to underline when we went to Merzouga’s Desert. We arrived by camel, when the sun had just hidden, left ours bags inside the tents and began walking up an enormous dune. We kept walking for a long time and once we reached the top, we lay down in the sand and were delighted contemplating the starry sky. This was definitely amazing…

I can teach Spanish, all I know about Spain, about its citizens and also about me. I’m hoping to learn about the places I’m visiting, people, habits... It would be great to improve my English, French, Portuguese and Chinese as well =P. There are a lot of things to share: a coffee, some beers, some traditional meals, some stories and experiences, a trip together… All of it could even end into a very close friendship.