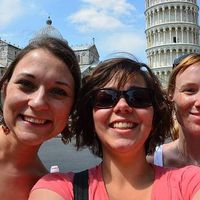 to come with one story and leave with another :)

I love my life

during my hitch hiking trips in Europe I have stayed with or hosted or met Markku and Miguel in Tampere and Elise with friends in Helsinki, Giorgio, Parmvir, Bart, Alex, Christian, Vlad and Ivana in Brussels, Kadi, Elena, Clara, Warapong, Elias, Maria, Saurabh, Geoffrey, Diogo, Francoise in Liege, Kioni in Maastricht, Sebastian in Hanover, Jens in Berlin, Weronika in Warsaw, Tobias in Rostock, Wim in Gent, Andrea and David in London, Tatjana in Frankfurt, Einar in Luxembourg, John, Harald and Alexandru in Oslo, Michael and Yoann in Paris, David in Ventspils, Daniele in Florence, Andrea in Rome, Lucky in Milan, Oliver in Luebeck, Pasquale in Naples, Luca in Bologna, Gian Luca, Tin Tin, Ari, Bruno, Laura and Chris in Barcelona, Mickael, Gudmundur and Ercan in Riga, David and his girflriend in Geiranger, Valentina, Gaetano, Iga and her boyfriend, Elisabeth, Joe, Jun, Lauren, Daniel, Rodolfo and Andre, Mishko, Mauricioo, Maria and her husband, Mariana and her boyfriend, Kayleigh, Gundega and her friend, Gorkem, Laura and her friend, Michael, Francisco and his friend, Benoit and his girlfriend, Long, Baiba and her husband, Duncan and his girlfriend, Rafael, Alessandro and Iulia, Andriy, Lydia, Chang, Daniel, Timur, Paula and Emilia, Sueyeon, Janos and Livia, Rodrigo, Carolina in Florence and others and in the CS meetings I've meet those wonderful Liégeois and Florentines.

My favourite movies are Soul Kitchen, Hunt for the Wilder people, Reprise, but there are few what will never be too old - Matrix, Fight Club, Breakfast at Tiffany's and Slumdog Millionare.

One of my favourite books from childhood until now is Lewis Caroll Alice's Adventures in Wonderland.

We live in a beautiful world, every day something happens. Be curious! Explore the world!

I can teach you Latvian :)

I would love to learn more about green lifestyle