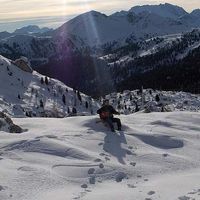 I was born in Brazil to an Italian family. I have lived in both countries and speak both languages.

Since 1991 I have been playing with different bands under a strict DIY ethos.

I lived in Italy from 2004 to 2008, dived into literature and backpacked a lot - got to get around in Italy and also to visit some 50 different countries.

Then I lived in Brighton from 2008 until 2011 and got back into making music. I used to run a club-night called Goo Nite in London, a DIY label called O Bosque/Woodland and played around with a few acts - including a tour with a dozen shows in the USA and Canada in 2009 and another in Europe in 2010).

From Nov 2010 to Feb 2011 I:
- drove an old van for the band Tamborines, who were on tour in mainland Europe (Italy, Germany and Denmark);
- been on the road with my son and his girlfriend across the Southwest of England (Stonehenge, Bath and Cornwall);
- hosted some friends, visiting beautiful places in Brighton and London;
- visited a couple of friends in Glasgow and traveled a little more in Europe, to Latvia and Iceland.

From March to May 2011 I was in the USA, first playing/recording with the Strobosmiles in NYC and New Jersey, then backpacking across North America, up and down through different parts of the USA, Mexico and Canada.

Then I came back to Brazil and went on to backpack in South America, passing through Uruguay, Argentina, Chile, Bolivia, Peru and different parts of Brazil. I visited Chapadas Diamantina and Chapada dos Veadeiros, RR, RN and PB. Then did the Transiberian (Europe, Russia, Mongolia and China).

From April 2012 to January 2014 Mariana and I run an arts centre/musical venue in São Paulo, called Espaço Cultural Walden.
Mariana and I have given birth to a beautiful baby girl called Laura on the 26th November 2013. She's wonderful!!! :-)
I had been working as a freelance translator and had been playing with A Espiral de Bukowski and Magic Crayon.

Now I am back in Europe.
In 2016 visited my son in the UK and a friend in Paris, spent the second semester in Perugia, as part of an Eramus+ exchange program at Università degli Studi di Perugia and since then I've been back living in the UK.

I had started busking with my ukulele! :)

Offering and asking for a couch, yeah.

Books: Walden, The Age of Reason, The Razor's Edge, On the Road, Our Band Could Be Your Life, Ask the Dust, Civil Disobedience, La confraternita dell'uva, City by Alessandro Baricco, If On a Winter's Night a Traveler, The Wall, Invisible Cities, The Plague, The Fall, The Stranger, Please Kill Me... etc.

Beware of all enterprises that require a new set of clothes.
Go confidently in the direction of your dreams! Live the life you've imagined. As you simplify your life, the laws of the universe will be simpler.
(Henry David Thoreau)

A person who never made a mistake never tried anything new.
Learn from yesterday, live for today, hope for tomorrow. The important thing is not to stop questioning.
(Albert Einstein)

Self-knowledge is no guarantee of happiness, but it is on the side of happiness and can supply the courage to fight for it.
Change your life today. Don't gamble on the future, act now, without delay.
(Simone de Beauvoir)

Life is what happens to you while you're busy making other plans.
Happiness is just how you feel when you don't feel miserable.
(John Lennon)

An ounce of practice is worth more than tons of preaching.
Be the change that you want to see in the world.
There's no way to happiness, happiness is the way.
(Mohandas Gandhi)