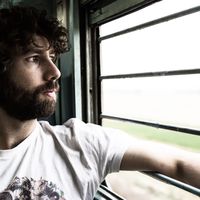 * I only accept people fully vaccinated against covid-19 *

Surfing, hosting, going to and organising meetings, events, etc. Quite active I suppose.

I first started hosting people during my studies in Ghent, Belgium. Apart from that, I have lived in quite non touristic areas, so there just weren't any requests :D I moved to Utrecht a couple of years ago where I started hosting again.

A lot of meeting / events / camps all over Europe.

Not a section that I consider complete or keep up to date, but to name some:

Indie / Electronic (lots of stuff, but currently very much in a minimal techno and deep house phase)

Severely outdated and incomplete, but some to mention:
Grand Budapest Hotel - Eternal Sunshine of the Spotless Mind - Battle Royale - The Rocky Horror Picture Show - The Shawshank Redemption - Requiem for a Dream - The Godfather - The Kid - The Usual Suspects - One Flew Over the Cuckoo's Nest - Spirited Away (and other Hayao Miyazaki films) - Labyrinth - Survive Style 5+ - Amélie - Dark City - Lola Rennt - Fear and Loathing in Las Vegas - Matchstick Men - You and Me and Everyone We Know - Lilya 4-Ever - Blade Runner - Kill Bill - American History X - Memento - Dogville - A Clockwork Orange - The Breakfast Club - Mr Nobody - Almost Famous - The Lord of the Rings trilogy - Pulp Fiction

Autumn 2010 I spontaneously decided to go visit some friends in far away places. 2 days later I was standing beside the road by myself, with a backpack and surprisingly little preparation, holding my thumb up.

The trip eventually lasted over 3 months and took me 4000 km through Germany, Austria and the Balkans, to Southern Turkey and back to Greece. Until winter arrived unexpectedly at the end of November and I took a flight back, due to the fact that I had only brought summer clothes and although freezing in the middle of the night in the middle of nowhere seems quite adventurous (and it is...), it wasn't the adventure I was looking for anymore :D

It was a very interesting experience and I found that there are many ways in which hitchhiking can be seen as a metaphor for life in its entirety. If anything, you certainly get to know a lot about yourself and others. Good and bad. Recommended for everyone :)