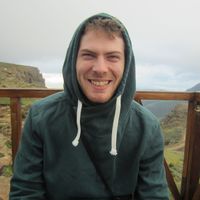 I'm a Brussels native, born and raised.
I studied Sociology at the VUB and am now working as a teacher. I love sitting in the sofa listening to music while drinking a beer with a couple of friends.

I love my city and would like you guys to experience it to the fullest.
It can however be a little expensive to stay here, so why not get a free room? There are 2 couches at your disposal.

When I was travelling in Italy, couchsurfing helped a lot. Me and my mate were broke and desperate for a roof over our head. We tried couchsurfing and the same evening, instead of sleeping in the train station, we were welcomed in someone's home.
That's when we decided that when we would have our own place, we would do the same.

Books:
Unfortunatly I'm not much of a reader to be honest

A pleasant evening sharing stories with some cheese and some beer (or something else, I'm not that picky)