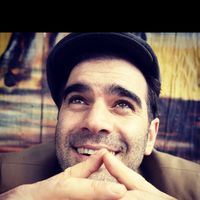 show up. be present. learn without judgement.

Little things make me happy: having a good hair day, seeing someone on the street singing to themselves, old men playing chess in the park, sleeping next to a warm body... I like non-verbal communication, wearing mismatched socks and eating raw garlic. I like to make music, sandwiches and friends. I have never been able to properly say the word "rural." I hate commercials, smelling other people's B.O on public busses, bad poetry, uncomfortable elevator banter, erasable pens, passive aggresiveness and the word "whodunit," when referring to a genre of movie or story.

"When one thing is true, you can be sure that its opposite is also true. And when you have understood that, you have begun to understand."

surfed in new orleans, brazil, germany and while on tour with my band throughout europe.

settling fights through dancing. dried mangoes. bedtime stories. 24-hour anything. questions that have no answers. fancy handwriting. all-you-can-eat indian food buffets. the musty smell of old books and records. flowershops. watching women leisurely getting their nails and feet done in nail shops. shy animals. shakespearean insults. finding cool stuff on the ground after big public events. unpopping my ears. waking up/falling asleep to the sounds of rain. snoring cats. inspiring people. explaining the art of making s'mores to the unitiated. spooning. dapper old cuban men. waitresses with tattoos. dipping sugar cubes in coffee. spinning around in circles till i get dizzy and fall down. watching telemundo t.v while stoned. drive-in movie theaters. getting wisdom from unlikely sources (drunk people, children). shoes tied over powerlines. bacon. women that store objects in their bras. train whistles. pet owners that look like their pets. getting my blood pressure taken. goose-pimply skin. pinstripe pants. groups of people beatboxing/rapping on street corners. standing underneath a twinkling, star-filled sky at night. those flat airport escalators that make me feel like i'm powerwalking. rosemary. motorists who pick their noses when stopped at red lights. animals grooming each other. conecpt of infinity. people who remember my name. people who sing to themselves. really expressive deaf interpreters. wearing warm clothes hot out the dryer. uesd book shops with lazy cats. helping old ladies across the street. vintage mexican vampire films. toy stores after midnight.

MOVIES: the labyrinth, princess bride, harold and maude, amelie, like water for chocolate, the producers, annie hall, anything by almodovar and kustarica

Being in new york city the night obama was elected. Opening up for Manu Chao in front of a sold out audience at the Warfield in San Francisco. Getting to know my parents. Getting to share a trainride conversation with Utah Phillips. Watching the sun rise in the Sahara Desert.

Try to learn to breathe deeply, really to taste food when you eat, and when you sleep really to sleep. Try as much as possible to be wholly alive with all your might, and when you laugh, laugh like hell. And when you get angry, get good and angry. Try to be alive. You will be dead soon enough.