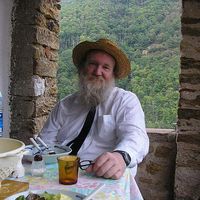 Ethnicity: My ancestors were Belgian (8 great-grandparents: 3 Flemish, 3 Walloon, 2 from Brussels). A family legend says that a farther ancestor, a Venetian named Michaeli, changed his name when he came to Ghent to do business with the British. Now that I've found Esperanto all people are my brethren no matter where they were born, educated, or live.

For the rest, if you still have questions after seeing my home site http://users.skynet.be/antoine.mechelynck/ and/or googling, then ask and I may answer.

In the US they may label me a "secular humanist" and even believe (wrongly) that since I don't go to church I have no morals. Know Aesop's fable, "The Blind Men and the Elephant"? I see it as a parabola of theologians and God.

I've started this profile (obviously), groups and email. I'll try not to forget announced club meetings, I'm open to tea or a drink, and we can proceed from there - but don't rush me, I'm only 64½ years young.

hm, I wouldn't say I've had much; but it's growing, see above.

MY LEGACY COUCHSURFING PROFILE
https://hammertime.couchsurfing.com/users/1417338/profile/legacy
It had HTML customizations, and despite the sentence at the bottom of this "Edit your Profile" page (the sentence starting "If you would like to copy your old HTML customizations,") no matter what I try I can't add HTML to _this_ profile. For instance, neither < b > nor < span style="font-weight: bold" > will give me bold text.

"Sitting on the fence" between Thinking and Feeling ("Visionary Dreamer" but almost "Intellectual Engineer"); and on the right side, the first four, but not the others, are in the same order as when I took the same test I don't know how long ago (a few years?)

My favourite song hasn't changed since (at least) 2005: it's still the Birdcatcher's Song from Mozart's Magic Flute. I don't have a link to a recording, but here's one to the lyrics, with translation and illustration by me.

Movies: it's been too long since I went to the cinema.

I'll have to research that one. I suppose that you might be amazed by what is ordinary life to me.

Oh, I know: discussed theology a whole night with a girl whose boyfriend was dead drunk in the next room, then come home to the most wonderful sunrise in my life.

Fallen in love to a lesbian and even dated her. (I said dated, not bedded. Of course, she regarded me as a friend, not a lover.)

Well, I've taught math, programmed in COBOL, translated English and Dutch to French, scrapped Windows for Linux, what else? I've even studied Latin in high school (6 hours a week for 6 years) without anything to show for it - _that_ language I won't be able to teach you.