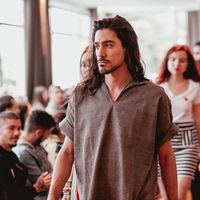 I am a psychopath using Couchsurfing to find new victims and force them to bellydance on 8-bit music while I sing opera. You can read my references below for a subjective opinion about this experience.

In real life, I am a physician and a musician. I work as a researcher on neurological rehabilitation therapies, basically I make devices to bring back motion to the paralyzed, see https://youtu.be/4qMMdDt6Glc ; in the meanwhile, I am running a music label I've founded called Shouka. You can drop an ear here : www.shouka.xyz ; here : www.arabstazy.net or even here : www.soundcloud.com/mettani

I am also member of the Kokusai Aikido Kenshukai Kobayashi Hirokazu Ryu Ha, a traditional Aikido academy. Aikido have been part of my life since 1999.

I host Couchsurfers and while they're asleep, I eat their brains to steal their knowledge.

A lot. Not a single bad experience.