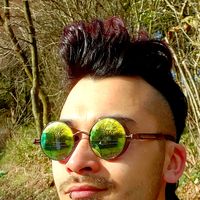 In my free time, I'm going out with my friends, go partying, write songtexts and poetry, listening to several kinds of music, especially via vinyl, love to travel around the world and get to know new people.

I'm an open minded, friendly and empathic guy, who loves to listen to the stories of new people. I'd love to laugh, cry and take care of my beloved ones!

So that's me, if you want to know more about me, let's hangout!

Because I love it to travel around the world, get to know new people and a friend of mine recommend me this app

I can teach in German and English, as well I do some IT Stuff, help you to find the perfect way for meditation, how to make Psychedelic Music and also some martial arts (even if I only want to show you the basics of it, otherwise I would dismiss the promise I once gave my grandmaster)