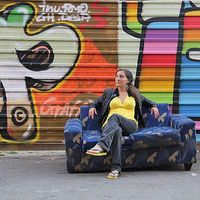 Born and raised in San Francisco, lived in London &amp; Manhattan the rest - I have been following my passion for Entrepreneurship and Documentary Film. I have a special place for CouchSurfing in my heart &amp; I directed the first full length feature ever to document CouchSurfing: www.onecouchatatime.com, a worldwide documentary about CouchSurfing ...SE Asia, Southern Africa, Australia, Europe, South America and ending at BurningMan -and you can download a copy on out website: www.OneCouchataTime.com under "see film!"

Ever since I could pick up a camera, which was quite a feat in the 80's if you've seen the gargantuan hunks of machinery they would call "video cameras," I wanted to tape the world. As I matured, I realized that it was specifically the medium of documentary film that called to me - because in a world where moments are fleeting and constantly re-written by our subjective memories, I find video documentation can be the purest form of telling a story while allowing people to open their perspectives and walk in each others shoes.

"If it's petty, don't sweat it. If it's sweaty, don't pet it." HONESTY every time. and "Sometimes you have to jump off tall buildings and build your wings on the way down" ~Annie Dillard.

I host, I am a hostee - a CouchSurfing "evangelist" spreading the word through "One Couch at a Time" documentary about the CS spirit internationally!

Tourism - Shmourism. Couch surfing, no matter how little or LARGE your budget, the best way to discover a city is through the locals!

Watermelon. Neuroscience. Micro-expressions. Teaching. Film. Entrepreneurship. Sociology. Nutrition. Zumba. Horse back riding. Traveling (of course). I love learning and being "in the know." A good conversation, funny antidote, capturing a moment on film, exchanging a quirky story, or an eye-opening revelation will always get me going. I find that I enjoy most anything that raises the heart beat: dancing, horseback riding, adventure + combined with a new experience and stimulating people make my day!

"4 Hour work week", "Think and Grow Rich" by Napoleon Hill, BLINK, the Alchemist and anything by Paulo Coelho...Musically I like Neo-Soul the most - Donnie Hathaway to Jill Scott and Must see movies: Big Lebowski, Happy Accidents, Memento, Crash.

TEACH: Final Cut Pro video editing/cinematography/art of entrepreurship, crowdfunding projects (like kickstarter.com), motivating change. I am the goddess of action... ANY type of DANCING (like SAMBA or AFRO-Haitian, LANGUAGES, facts, entrepreneurship and influence.