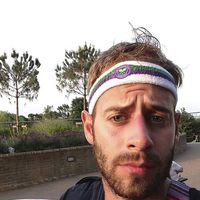 If asked, I'd like to think my best friends would predict me to be loyal, competent, and otherwise completely unpredictable.

Everything I do is an attempt to better understand myself and the world I live in. I believe in God and I see His work in the beauty of the world — both people and places.

I've had an amazing experience with this in Guatemala, though it was not directly though this website.. A few positive interactions in Brazil for the World Cup as well.

If I could do anything, it would be something I've never done before. Happiness is only real when rules are made to be broken with friends, or something like that.

I went hiking in the Grand Canyon last December. We started out in the morning and you couldn't see 20 yards through the fog. Then, as we got lower and the heat dissipated the clouds, we rounded a corner and abruptly saw what I now consider to be the most impressive wonder in the world.

Last summer in Guatemala I was hanging out with two people I met in a hostel. I had nowhere to stay, and no plans. They invited me to a party. At the party, I saw a girl who looked familiar. She was one of four Guatemalans I knew from a economics seminar in the US the year before, but we had had zero contact between meetings. She invited me to stay at her family's house the next two nights. How does that happen.

I am familiar with Austrian economics, which emphasizes the importance individual action and doesn't believe in the "macro" aspect that John Maynard Keynes made so popular...

I am becoming somewhat knowledgable in Ancient and Medieval history..