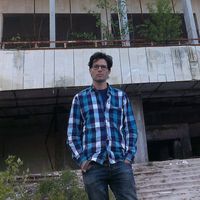 Please read my profile first. Also I do not respond to requests in Russian or Ukrainian.

PLUS do yourself a favor and instead of supporting the greedy bastards running this commercial dump, check out some other hospex sites that shalt not be named here - because well, capitalism.

It's hard to define oneself, but I guess it's needed to shape some expectation when you have people who want to come and mushroom on your floor. Oh well.

I'm a programmer / website person / things on the internet person by day. I'm a Dutchie living in Ukraine. I'm not the most extrovert of folks, but I do like socializing, talking, meeting new people and experiencing new things. I like to enjoy moments, whatever they are. A lot of people went before you liking me for some reason, so it's cool.

I keep couches occupied, sharing my experiences, thoughts and all those other annoying things. I fix your network, and other computer misery. I can cook (vegetarian!) although nobody ever asks. Oh - and I host.

Couchsurfing whereever possible to get to know new people and new places. To seek out new lifes and new civilizations...

Hosted many peoples at my homes ( Netherlands, Ukraine, elsewhere )

Has been on tons of CS-meetings, like the annual Berlin Beach Camp and the new-years camps half a dozen times.

My guest experience reaches from Netherlands to Chile and all countries in between. I'll never forget my hosts and the amazing experiences I had surfing in all those different places.

I'm very interested in all the things I do not know yet.

Books: I love good literature, but also read a lot of non-fiction mostly on social and political topics. Recently I'm binging on old books. I read a book every few days, then take a break and return.

Movies are also being watched. Mostly on the side of indie / documentary / interesting stuff. I can recommend some cinemas here in Kyiv showing original movies in foreign languages. Plus series ( favs' are Battlestar, The Wire, Twin peaks )

Maybe the most amazing is the notion that indeed everywhere in the world there are nice and utterly cool people you can relate to, travel and stay with and see the world is not the dangerous and antisocial place a lot of people are talking about - but not traveling to.

I can teach you how to make websites, how to use social media, how to cook vegetarian, how to find geocaches, how to curse in Dutch ( en Haags ). A bunch of languages somewhat good or worse. Everything else, I still have to learn. Although I have an opinion for better or worse on a lot of subjects.