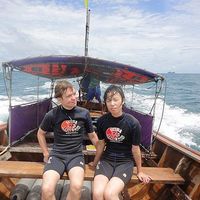 Most of all we want to meet you and hear your story!

But since it's the custom on CouchSurfing, I'll also write something...

Grew up in Finland with two major passions: computer programming and learning languages (I was interested in English, Russian and Japanese).

We lived for several years together in Finland, while she studied and I wrote some apps. Then we moved to Tokushima, Japan, and we've been here since 2010.

We've hosted surfers, but lately with our son born it became difficult. Never surfed anywhere ourselves. But we'd still like to meet people.

We've had a ton of interesting people over. It's refreshing to hear new perspectives on life.

Every book I've ever read: https://www.goodreads.com/review/list/29871091-bemmu?shelf=read

Too many to list. I've been playing since 8-bit, currently heavily into pubg.

Made ice cream with liquid nitrogen