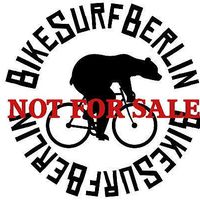 My primary reason for joining CS is to not let a CouchSurfer who visits Berlin go without a bike due to lack of funds or bike contacts.

Due to the change of Couchsurfing from a non-profit platform to a profit-making business, I only use this profile to invite people to join me on www.bewelcome.org or www.warmshowers.org

I´m part of an initiative against the profit-making goals of Couchsurfing.
To know more about it and see how to join us: www.goodbyecouchsurfing.blogspot.com

ALL YOU NEED TO DO TO BORROW A BIKE FROM ME:
Go to www.bikesurf.org

WHAT YOU CAN DO FOR ME IN RETURN:
- Not to wreck/steal/maim others with my bikes
- A positive review for the profile, if happy
- Any advice you may have to help me on my mission; new locations, etc.
- Any donation you can afford (money or otherwise)
- Any bike donation to expand the service (you have no idea how happy this makes me)
- Any help in maintaining the bikes in roadworthy condition

When man invented the bicycle he reached the peak of his attainments. Here was a machine of precision and balance for the convenience of man. And (unlike subsequent inventions for man's convenience) the more he used it, the fitter his body became. Here, for once, was a product of man's brain that was entirely beneficial to those who used it, and of no harm or irritation to others. Progress should have stopped when man invented the bicycle. ~ Elizabeth West

Whenever I see an adult on a bicycle, I have hope for the human race. ~ H.G. Wells

The steps of one's progress are distinctly marked. At the end of each lesson he knows he has acquired something, and he also knows what that something is, and likewise that it will stay with him. It is not like studying German, where you mull along, in a groping, uncertain way, for thirty years; and at last, just as you think you've got it, they spring the subjunctive on you, and there you are. No -- and I see now, plainly enough, that the great pity about the German language is, that you can't fall off it and hurt yourself. There is nothing like that feature to make you attend strictly to business. But I also see, by what I have learned of bicycling, that the right and only sure way to learn German is by the bicycling method. That is to say, take a grip on one villainy of it at a time, and learn it -- not ease up and shirk to the next, leaving that one half learned. ~ Mark Twain Taming the Bicycle. 1884.

Together with some friends we launched this project to reduce the cost to CSers staying in Berlin and allow them the chance to expand their lungs and mind by cycling about this wondrous, action-packed and historic city.

I only joined in June 2012 but have already made . Hoping that nobody is found wanting a bike here in my adopted city of Berlin.

Totally mad about bikes and spreading the word about both Berlin and bikes:
- Allowing CSers to travel Berlin the best way possible: by bike!
- Giving CSers the opportunity to avoid high-cost bike rental
- Promoting THE green way to travel

Bicycling around Berlin is relatively safe and painfree, but I recommend that you use the following (not provided):
Helmet
Bicycle lights at night
Common sense :-)

I also recommend that you lock (TO SOMETHING ELSE) the bike in sensible, well-lit areas during the day and in a more secure place at night (e.g., in the backyard of where you are staying or - even better - snuggling up beside you in bed!).

Facts about cycling/ Did you know?
1) Cycling burns 600 calories an hour
2) On a bicycle you can travel 3 times faster than you can walk, for the same amount of energy.
3) On a bicycle you can travel up to 1037 kilometres on the energy equivalent of a single litre of petrol.
4) Twenty bicycles can be parked in the same space taken up by one car.
5) Cycling is great exercise: leisurely cycling (around 20 km/h) burns calories at the same rate as very brisk walking (faster than 6.5 km/h)