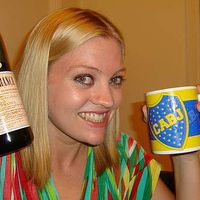 In avoidance of a real job

I polished off a Bachelor of Arts in 2010, and instead of searching for a graduate position like any sane person would do, I decided to take the pennies I'd saved from pouring beers with me for 6 months in South America. I attempted to learn Spanish in Buenos Aires for 2 months, and spent the rest of the time travelling in Argentina, Brazil, Uruguay, Peru, Bolivia & Colombia, practising the little Spanish I had learnt and meeting all sorts of freaks along the way.

I returned from this adventure in March 2011, was back in Australia (surfing my mate's couches) until the end of April. I then went to Thailand and taught English to school kids for 5 months in Lopburi. Then I travelled in Vietnam and Cambodia. Obviously, I loathe travelling and really enjoy staying in one place for extended periods of time.

I'm going to Europe for 2 months this year (being 2013) in June-August, so might be looking for some couches then!

I keep a blog, so if you are in anyway interested in the happenings of a TEFL teacher in Thailand, click your ass to http://bridgetovertravelledwaters.tumblr.com/

I've met a few people through couch surfing while I was in South America, and none of them turned out to be creeps, which I was thankful for. Hope to continue this streak.

But also, I don't want to date you.

Well... I like couches. I spend some time on them. But haven't participated in any CouchSurfing as yet, other than meeting fellow couch surfers for a drink, or a wander.

MOVIES: MGM musicals from the 50s, anything with Gene Kelly, anything that makes me laugh, not into action movies

MUSIC: a WIDE variety of things.. some classical, a lot of pop music from the 1950s to now, Eurovision entries! And various types of world music..

I spontaneously decided to go to Rosario, Argentina (leaving from Buenos Aires) with a friend I met through couch surfing. We arrived at night, and there were no beds for us anywhere so we wandered around all night. Nothing the next day either. All we could do was get a bus right back to Buenos Aires. Full story here: http://www.getjealous.com/getjealous.php?action=showdiaryentry&diary_id=1845644&go=bridgetkramer

I play the piano, violin, and cello.. I also know the lyrics to a lot of pop songs - very useful, I assure you! I'm also about to teach English to kids in Thailand, so apparently I can do that.