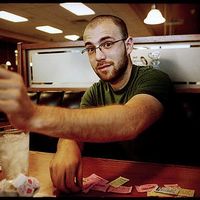 to design a computer game that has extrinsic emotional/educational value to people.

1. I am not ashamed to admit my weaknesses or discuss my history!
2. Baking and pixel art are extremely important!
3. Flakiness is desirable in crusts, but not in people!
4. I cherish the idea that video games are an art form, and I am searching for a way to get motivated about creating and practicing that art.
5. I am in love with cheesy snacks, like Cheddar Goldfish.
6. I find Native American culture fascinating, and I really like talking to people about how any indigenous culture has been treated. I'm always looking for new ideas/information on that one.
6. I love to read others' writing, and my own.

When I was a teacher,
I was sick.
my ex-girlfriend wrote me a letter
of recommendation
for a job I dreamed I'd get.
Maybe it was an unfair thing to ask for.
I wanted to believe in myself,
If only by proxy.

I got the job.

I announced my ascendance
to the school secretary, the next day.
She said, You've had it?
Wishing for some
(sex)
righteous reversal,
I said, more like It's had me.

When traveling
we leave shining trails of ourselves,
sluggish memories.

By living in Taiwan and making you happy.

I've spent a few nights here and there in New York on friends' couches, operating mostly as an analog couch surfer. But then I stayed at my friend Ben's house for a month, and he taught me what it was all about. Now the world is my oyster, and stuff. And I've been hosting people in Taiwan and Australia ever since.

Favorite Books:The Lone Ranger and Tonto Fistfight in Heaven, Crime and Punishment, The Stars My Destination, Slaughterhouse Five, Preacher, The Watchmen, The Day of the Triffids, Dracula, Mythologies (By Roland Barthes).

I have traveled down rivers in central Florida with at-risk teenagers. I have seen a kid punch a tree on purpose in order to break his hand, so that he could go away from that river. He was wrong. We took him to the hospital, and brought him back. Har?

On this same trip, I saw a kid get beaten by his friends. They said that they did it because they wanted to go home, and if they were violent enough they'd have to get taken off the trip. They apologized to him even while they were terrorizing him after he locked himself in a van in 110 degree heat. They were right. They were sent home.

I was once threatened by a mother at gunpoint during parent-teacher conferences, at my old school in Brooklyn.

I once ate an entire large cardboard carton of cheddar goldfish in ONE AFTERNOON, while playing Metroid.

I can teach you some Chinese! A tiny little bit.

I would like to figure out how to do a kickup, how to walk on my hands, and how to be better at Actionscript. I would also like to learn to dance. I'm no good at that, yet. Oh! And I'd like to learn about alternative medicine/nutrition, as a means to an end of me being the most forgetful person in the universe. That would help.