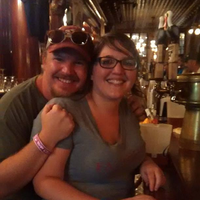 We're back! At least, we really hope to be. After a hectic year that involved opening up Lower Alabama's craft brewery, where Dan is head brewer, we finally have some time to rejoin the ranks of the awesome CS community and hopefully get back to hosting some amazing folks on their way through Mobile.
------------------------------
We're both Alabama transplants â Dan hails from New York while Amy calls Louisiana her hometown â and we live in a house in charming midtown Mobile, a beautiful area full of historic homes and giant oaks. We've got three cats - Charli, Isabelle and Oscar - and a cute mutt named Gumbeaux who loves to travel nearly as much as we do (though she doesn't always get to come along).

Our participation has been mainly hosting folks from CS, which has been an absolute pleasure all around. We look forward to having more time to travel, and in the meantime look forward to meeting even more great people through Couch Surfing.

We were immediately welcomed into the local CS community as if we were meeting old friends, and ever since, we've had an itch to keep meeting new "old friends". In just a short time hosting and surfing, we've learned how to cut hair and how to root for the Tottenham-Hotspur Football Club. We've had the sound of bagpipes fill our living room and we've seen an amazing concert by fellow CSer and awesome musician Brett Randell in a friend's living room. We've gotten up at 5 a.m. on a Sunday morning just to make sure we could treat our Finnish surfer to a prime spot on the Mardi Gras parade route. We've stood calmly as we were surrounded by a quarter million honey bees. We've ridden in a 1971 Mini through the street of Washington, D.C. and we've gotten to meet more amazing people than we can count. And it's all thanks to CouchSurfing.

We're obviously interested in beer - not just drinking it and brewing it, but also visiting breweries and beer destinations on our travels - but we also both love photography, cooking (especially southern food), reading, road-tripping and spending time with our awesome dog, Gumbeaux. We've recently started biking again after a long time off (fortunately, it's just like riding a bike), and have since joined a local bicycling group and have taken to riding our bikes to and from work most days in addition to recreationally. Amy also loves sewing.

We love live music, and travel every year to north Mississippi for the "Hill Country Picnic," one of the most laid-back, down-home, true-to-the-roots blues festivals out there. Anything from the Avett Brothers, Allman Brothers, Wood Brothers, Felice Brothers (we seem to like brothers), Pink Floyd, North Mississippi Allstars, Muse, Wilco, Phish, Radiohead... We're pretty open to anything, and we're often listening to WWOZ out of New Orleans.

We got engaged beneath the redwoods of Northern California, minutes after Amy came across a four-leaf clover. Yeah, that was pretty amazing.

This may seem redundant, but you know, we really like beer so we'd be happy to show you around the brewery in Fairhope if we're hosting you or if you're staying somewhere nearby!

Here's a map of some of our favorite things to do and places to hang out in the Mobile area: http://goo.gl/EJsUo