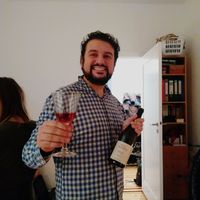 Moving to Europe. I've just got my Italian citizenship after a few months during this process and returned to Berlin, where my plan is to spend at least some couple of years.

My name is Everton, but you can call me Tom. I'm an enthusiast of the idea that knowledge should be free, so I participate of some related movements:

I've been involved in a lot of projects related to these issues in recent years: Wikipedia, Wikimedia Commons, OER in Brazil, free software, civic hacking, access to cultural goods (more flexible copyright law on my country), freedom of information legislation in Brazil, among others.

I am the founder of the chapter of Open Knowledge International in Brazil (see br.okfn.org) and was working previously as a consultant for Wikimedia Foundation (see education.wikimedia.org).

I've changed to Europe recently, so I cannot host until I settle myself in Berlin. At the moment I'm in the final phase to get my Italian citizenship (I'm descendent of Italians).

I've travelled for 3 months in 2011 in Europe and Middle-East and I've used a lot couch surfing.

I've been hosting people since 2009 in São Paulo and I've surfed a lot in 2011 while backpacking in Europe and a little at Middle East.