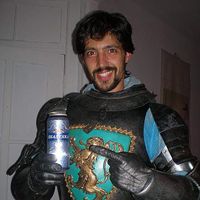 To be as good and as natural of a human being as I can on this planet! ..maybe it sounds idealistic, but hey why shouldn't I try?

I joined CS in February 2009 and I couldn't be happier with my decision to join... Lately I have not been an active member due to new things in life but also because this site doesn't have the same feel as it once did. CS has gone from a project made great by the hard work of volunteers to a profit driven corporation making money for some people!!! The idea behind CS is awesome and it's a wonderful project whose sole purpose is to bring people together from all corners of the world. Now it brings money from all corners of the world to a few people through the volunteer work the rest of us do. I really don't agree with this, so I'm putting it at the top of my description! That's just how I feel.

When I initially joined this project I realized that there were a lot of people out there with their own agendas and motives for joining CS, but I for one really believed it was a worthwhile idea. I can only speak for myself, and I feel I'm sincere when I say that it's people helping people which will make life better for all of us on this planet.

I have been participating mostly as a host (though I used CS when I traveled to Spain in 2009 &amp; Montreal in 2012). Of course I'd like to travel more and I'm sure one day I'll have more chances to do so, but until then I really enjoy meeting folks, hearing stories and making new connections.

A little more about me:
I'm currently working freelance on various projects throughout NYC. I design and build custom, specific objects and spaces for both indoors &amp; outdoors; I'm a tennis instructor (I've been doing this since 2008); I do some IT work, mostly hardware related as well as network setups, etc); translations; and when I get the chance I write. I work for myself and believe me you simply can't beat that! I don't live to make money, I simply live to live life...
I did the 9-5 thing but it wasn't working for me. I mean I worked hard for it, but it wasn't giving back to me as much as I was putting in. I much prefer to make my own hours and be my own boss while doing work which I really enjoy! I've discovered that once you break the cycle of slaving for the system then you can really start being a more productive human being. I'm also a freegan -in the broader sense of the word, as I hate seeing waste and I strongly feel that we all need to stop throwing away so much stuff. As the saying goes 'one man's trash is another's treasure'... and you won't believe the amount of things I've been able to create from stuff others have tossed out. I also love plants and nature, have many household plants throughout my apartment and I also engage in composting natural food remains in my backyard to create better planting soil. A good friend once told me that I live an alternative lifestyle. I guess that's true.
Simply put I feel that we earthlings need to clean up our act and become more eco friendly. I do what I can.

Personally I've set myself to be more aware of the things which I leave behind and throughout the last few years I've resolved to consume less (not just in regards to food, but also materialistically); to relieve financial stress (because there's no need to end up in debt from buying all that crap they try to sell you); and to live daily within my means and with a smile on my face... I also don't have, nor watch, TV -actually I've been without a TV for about the past 6 years and boy do I feel free. I think everyone should live their own life and not watch someone else's on TV. Life is too short for all the drama and hype that surrounds us anyhow!!

Oh, and I have to mention this since a few people have already asked me why my age is listed as 101 in this profile. That's because I feel age is nothing more than a label which we slap on ourselves just as we slap labels on everything else in our lives. I feel I am at the age of learning, no matter how old I may get. Just as we have MATH 101 in school I feel I'm in LIFE 101 now... with each day being a new learning experience.

So, thank you for taking the time to view my profile, and if you're looking to surf, just let me know. I can't promise to host everyone who writes to me, but I'll do what I can for anyone out there (so long as I have the space and time).

I believe in Karma. Not because I read it somewhere, not because I'm part of some religious group that preaches it, and definitely not because I heard someone talk about it on TV. But simply because it's happened to me. What goes around DOES come around.
And because of the life experiences I've been through I've learned that there is simply one golden rule on this planet: Do to someone else exactly what you would like someone else to do to you!

And to add a little more, I do not believe in waste. I see it constantly each and every day how we humans make things only to discard them cheaply. Especially when living in a large city, this happens so often that we don't even notice it anymore. I truly believe that people should go back to their roots and live with Nature (even in cities), but we should not try to conquer Nature. Embrace technology and all the advancements which we have achieved, but that does not give us the right to use technology to rip apart this planet for the sole sake of profits and financial growth. We're all in this together. When one person suffers we all suffer.

And lastly I'd like to add that I strongly feel that people should be free to do and to express themselves in any way they choose (so long as they don't harm anyone else). Let's stop putting labels on each other; let's stop hating and discriminating each other because of the different lifestyles we each lead.

Sorry to write so much, but this is my personal philosophy :)

- Primarily hosted lots of guests from various locations throughout the world;
- Finally had my first CS experience in Spain in 2009. Had 3 hosts in 3 different cities (Barcelona, Ledesma &amp; Sitges);
- Surfed in Montreal in July 2012;

Talking to people who've had varying experiences in life and seeing things from other points of view. I feel this can only enlighten you.
I also love listening to a good song over and over again, or watching a movie with people I'm close to.
Having a good meal and sharing a bottle of wine while conversing about interesting topics is DEFINITELY something I enjoy doing!

I feel that there is MUCH more to life than the daily grind of a 9-5 (or an 8 AM to 7 PM job as in some cases nowadays).
My main interest in life is to enjoy the simple things, forget the rat race!! Rather accumulate knowledge, understand why things are as they are and try to change them for the better; read and enjoy a good book; learn to play an instrument; go out for a walk; talk to people and GET OFF Facebook; do a good deed for someone unexpectedly; enjoy a nice sunny day or a nice rainy day.... These things interest me more than sitting in a cubicle hoping to make 'bank'!

Waking up every morning! Life doesn't stop surprising and amazing me. It'll stop being amazing the day I don't wake up!!

I'll teach anyone anything I know. There's no reason for me not to do so, because there's nothing I know that's a secret.
Teaching someone something ensures that one day you'll have one more source to get an answer to one of your own questions.