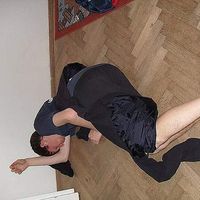 Road Trip The East Coast, The Northern/Canadian Border from The East To West, USA &amp; Post in BC, Vancouver, Canada For a Month before the End of Fall!

I was born and raised in Miami, Florida. I went to an acting high school, graduated, studied it a little longer in community college along with film, graduated and worked in the film industry of Miami for six years.

I moved to Prague, Czech Republic and lived there for four years. Whilst there I taught English, worked in the film industry, translated and adapted books and did voice-over narrations of literary works.

Afterwards, moved to Naples, Florida where I am getting my Bachelors and working part-time as a Soccer Referee, Party Organizer and substitute teacher.

Karma, no joke! Mostly everybody in the world is full of shit and if you find a few that aren't (which is very possible.) Don't lose them. Being real and honest is the key to pure happiness. You make your life. So when you wake up in the morning, make it how you want it. Not having a goal is worst than not getting to one. You control your mind, so tell it what you really want it to do. Having a positive mental attitude will only lead to success. I am open to hearing about religions and am not the type to criticize or hurt people who have their beliefs but my belief is that all of us are Gods!!! And... Smoke Weed Everyday!

I have my own place, so you have a place to stay. I think everybody should have the same mentality on this website.

I've hosted 300 confirmed or not confirmed total couchsurfers for sure! I couchsurfed with Lauren Rose Ludtke, John David Sidor, Gergely Timar and Jack Rooney for one night, with Johannes Louger for four days Ashley Dhiel for two weeks, Robert Ramon Zimmerman for five days, Jo Blazkow for six days, Virginia Salas-Kastillio for seven days and Marcel "Milk" The Shell" Shwittlick for six days. I've hosted 50 from mid-december(2009) to early January (2010). 50 from mid-january (2010) to early May(2010). 1 while in Naples, Florida living with my parents(but I hosted Rokia Kone in Prague before.) 50 since the Fall 2010 to June 2011. 22 and 54 for New Years 2009-2010 and New Years 2010-2011 in 1-3 nights.visited 13 states (5.77%)Create your own visited map of The World

I can watch and play soccer all day! Ultimate Frisbee is the greatest sport ever invented. I love to chill, drink good beer I love to smoke weed. People are an inspiration to me (which is why I joined couchsurfing.) Walking around, getting lost is so cool. The beach is magical! In Austria I did a-lot of cliff jumping and mountain climbing - so anything to do with the nature I am down for. I'm actually really good at dancing, no joke. Languages! I will know three by the Summer of 2015! My goal is to know 5-7 before I die. Karma is so real, so be real in your life. The list can go on and on but what is really important to know is that I am interested in life and YOU! So let us discover more interests.

Books: Biographies, Film, Short Stories, Languages
Movies: Polanski, Kubrick, Forman, Hitchcock, French Noir and independent.
Music: I am so far behind in music that I am begging you to help me find new stuff to listen to because I am still stuck in the 60's.

With some Italians, Americans and a Canadian we stole a shopping cart and made a bar-b-que with it in the middle of a public park.

I went to a water park with Scanlan and The Shell and we went three down all together on a super fast slide.

Outdrinking Pirita and Maria (The Finns) on one occassion from two nights. Which if you think about it isn´t easy to outdrink Finnish People.

Having Rachel Anderson stay with me for 26 days! My longest surfer and for sure nobody will beat her. Plus we have the hidden recipe of Surfer On Acid Shots.

Playing and Learning Beer Ball with Bourky! Such an amazing, simple game.

Going on top of the Untersberg, a Holy Mountain. Jumping off a 27 meter cliff and Going Rocket Bungee Jumping. It's like Bungee Jumping but double the ride.

Meeting the Riffer Boys in an undisclosed location in Salzburg, Austria. They gave me the greatest Summer of my life. They gave me a home when I didn't have one! They are true couchsurfers and refuse to be on the website or even on facebook. They are the definition of the kind of people you want in your life.

English, American Spanish (So Hilarious) how to be amazing (no, really, I'm very good at this and I had to go through passages to reach this title of amazingness.) And, to be real.
I want to learn how others roll cigarettes.
Dude, we can share whatever you want. We can exchange hearts if your open enough.

Ill hasre everything with you as long as you understand that I am your host and am only trying to achieve the best out of both our situations.