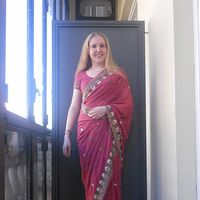 The description I had here for a few years has changed a bit. I'll think about that and get back to you :)

Make every day a masterpiece.

The only things in life that I regret are the things I didn't do (which usually means I try to do everything, but I wouldn't change that either for the opportunities I've had and people I've met.) Come to think of it, though, I don't have regrets...not worth it!

I was extremely involved in the project for over 5 years including when Couchsurfing was quite new. I've scaled back my involvement as a host due to other major commitments (namely, graduate school and getting married), but I like to get plugged in when I'm traveling or when my schedule opens up a bit.

Create your own visitor map!Surfing / hosting / nomadic living experiences roughly include:68. Surfed with my new in-laws in Taipei, Taiwan!67. Hosted Austin and Brandon from Wooster, OH66. Hosted Ben and Alison from Mobile, AL65. Hosted Jesse from San Diego, CA64. Surfed with Jimmy in Mobile, AL63. Moved to Atlanta, GA for an internship62. Hosted Matt from Vancouver, BC61. Hosted Jason and Victoria from Denver, CO60. Hosted Alyona from Moscow, Russia59. 2011-2012 brought lots of "unofficial" couchsurfing in Dubai, Stockholm, Saratoga, Sonoma, Menlo Park, London, Cape Cod, Austin, Toronto, Charleston, Madrid, Portugal, Durham, Chicago, Memphis, Tunica, Philadelphia, Evanston, Puerto Rico, Maine, Buenos Aires, Uruguay, Mexico City, Cuernavaca and New Orleans :)58. Surfed with Seunghyun and Jin Woo in Seoul, South Korea57. Surfed with Barry in Beijing, China56. Hosted Callan from Capetown, South Africa55. Surfed with Tom in Lindenhurst, NY54. Hosted Lisa from Winterthur, Switzerland53. Hosted Theresa from Boston, MA52. Surfed with Derek in Minneapolis, MN51. Hosted Jenni and Tiina from Tampere/Helsinki, Finland50. Surfed with Roy at the SHAH in Toronto, ON49. Surfed with Jon in Syracuse, NY48. Surfed with Claudia and Bill in Baltimore, MD47. Hosted Audrey from Normandy, France46. Hosted Janni and Janne from Tampere, Finland45. Hosted Amy from Kingston, Canada44. Hosted Ana from Porto, Portugal43. Hosted Crystal from Santa Monica, CA / all over the place 42. Hosted Lola from Stockholm, Sweden41. Hosted Vera, Zoltán, and Balázs from Szeged, Hungary40. Hosted Nadiéjda and Pamela from Paris, France39. Surfed with Maryanne and about 30 other CSers for a weekend in Spencertown, NY38. Hosted Ester from Munich, Germany37. Hosted Dirk from Merksplas, Belgium36. Hosted Allie and Alex from Roanoke, VA35. Hosted Michel, a true nomad originally from France34. Surfed with about 20 CSers for a weekend in Atlantic City, NJ (thank you Rey for the hotel room!)33. Hosted Anders and David from Copenhagen, Denmark32. Hosted Rich and Gabe from New Paltz, NY and Mike from Kitzbuhel, Austria31. Surfed with Sri in Troy, MI30. Surfed with Cliff in Ann Arbor, MI29. Surfed with Slawek for several weeks while I transitioned to a new job in Connecticut and apartment in Manhattan (thank you!!)28. Surfed with Joanna and David in Chattanooga, TN27. Surfed with Aaron and Rachel in Nashville, TN26. Surfed with Victoria in Ancram, NY for a fall "leaf-peeping" weekend25. Surfed with Dante in Boston, MA24. Surfed with Carol in Dallas, TX23. Surfed with Rich in New Paltz, NY22. Surfed with Manoj (again!) in Kansas City, MO21. Hosted Alisa from Olympia, WA20. Surfed with John and Astrud in Kernersville, NC19. Surfed with Laura and Bob in Greensboro, NC18. Moved back to Chatham, NJ to surf with my parents for a while...no shame in that :)17. Surfed with Sandrine and then Jonathan in Vancouver, Canada16. Surfed with Lewis in Portland, OR15. Surfed with Richae in Boise, ID14. Surfed with Emily in Seattle, WA13. Surfed with Suzannah in Redmond, WA12. Moved to Bellevue, WA for three months and mostly "surfed" in hotels but traveled on the weekend!11. Surfed with George in Stamford, CT...then I ended up moving a block away for a couple of months for another consulting project!10. Moved to Phoenix, Arizona for a couple of months with my consulting job.9. Moved back to Chatham, NJ full-time and surfed with a number of friends in Manhattan, Jersey City, and Brooklyn: Slawek, Ryan, Jim, Mike, Robyn, Alex, Alexandra, Katryn, and probably others I'm forgetting.8. Surfed with Erik in Mountain View, CA7. Hosted Lori and two other girls (?) from Indiana6. Hosted Mike from Scarsdale, NY5. Hosted Weronika and Helene from Warsaw, Poland4. Hosted Marta from Seattle, WA3. Surfed with Manoj in Stockholm (I love reciprocity!)2. Hosted Manoj from Stockholm, Sweden1. Joined Couchsurfing while I lived in Hamburg, Germany and was traveling through Central Europe; surfed with Mirta in Zagreb, CroatiaThis doesn't include many of the old friends or relatives I've stayed with or hosted outside of the site! In addition to surfing, I've been involved in many NYC social events and have organized events in other cities where I have lived temporarily. I've often met up to show people around my city and always try to share my knowledge with travelers who have questions.

I love music and have played the viola and violin for many years (as well as dabbled in a little singing and dancing.)

I watch a lot of foreign films, and a few favorites include: the Red Violin, Goodbye Lenin!, Life is Beautiful, Kristin Lavransdatter, Il Postino, Så som i himmelen, Bin-Jip, Luther, Monsoon Wedding, Siddhartha, Happenstances, Girl with a Pearl Earring, Factotum, Elling, The Lives of Others, C.R.A.Z.Y., Balzac and the Little Chinese Seamstress, Udon, and The Namesake.

As for books, I recommend "Ceremony" by Leslie Marmon Silko, "Refuge" by Terry Tempest Williams, "Memoirs of a Geisha" by Andrew Golden, "Empress Orchid" by Anchee Min, "Falling Leaves" by Adeline Yen Mah, "CEO of the Sofa" by P.J. O'Rourke, "Jubilee" by Margaret Walker, and anything by Hermann Hesse.

Although it's not included here, I could spend many days on end exploring art museums; I find modern art particularly thought-provoking, and I have found works from all time periods that really inspire me.

As an eight-year-old, I came face-to-face with two moose by a trout pond when I was visiting relatives in Wyoming...oops! I've also gone ziplining and seen lots of rare birds in remote parts of Costa Rica. I've eaten pretty bizarre foods (some thanks to CSers) such as live termites. Some of the most profound experiences I have had are during mission trips to developing countries (Honduras, Mexico) or materially impoverished parts of the U.S. (upstate New York, Caribbean migrant communities in Miami), where many of the people I have worked with have shown incredible gratitude, faith, and love for each other in the face of adversity.

I organize great events. I like talking about policy and the different industries I've worked in as a consultant, and can give a good tour of an art museum or an introduction to wine. I've lived in eight U.S. states and Germany twice and love talking about my travels and all the places I want to go. I want to learn more languages and how to cook some new cuisines. I've helped a number of people get plugged into community and want to keep serving others as best I can.