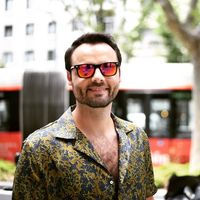 CURRENT MISSION
Settle down in Barcelona for the 3rd time after a couple of years travelling, and enjoy life to its fullest.

ABOUT ME
Like everyone else on this site, I love travelling and meeting new and different people. I used to host a lot of people a few years back, but now that I've got a smaller apartment I unfortunately can't do it as often as I'd like to, and usually I prefer last minute requests (max a week before you arrive). I know this isn't ideal for you, but I prefer to have my options open and not have to be in town because I have a guest scheduled since two months ago.

PHILOSOPHY
Treat Others As You Would Like To Be Treated

HOW I PARTICIPATE IN COUCHSURFING
I used to host people quite regularly at my place. I was also quite an active member of the CS community in Barcelona, organizing as many events and meetings as my time allowed. Now I live at a smaller place so I host less often, and am also less involved in the CS community (but do keep in touch with some good friends from it).

COUCHSURFING EXPERIENCE
Surfed in NY for two weeks and hosted a lot of people in Barcelona. Have also met countless awesome people in meetings and parties.

I'm interested in pretty much anything. Music, movies, travel, cooking, personal growth... BUT if you know about doing business on the Internet, technology and entrepreneurship we could probably talk for hours. But seriously, just talk to me about anything. If you're passionate about it, you'll get my attention :)

Mostly rock &amp; roll and electronic music, but I listen to pretty much anything. Just the same about movies and TV shows. Some of my favorites in all categories: Santana, Bonobo, The Offspring, Queen, Citizen Cope, The Police, The Killers, U2, The Hives, Kings of Leon, Red Hot Chilli Peppers... Lost, The Big Bang Theory, Sherlock, Community, The Office... Groundhog Day, Braveheart, Shawshank Redemption, Fightclub, Snatch, Saving Private Ryan, Million Dollar Baby...

Skydiving and running the bulls in San Fermines come to mind.

I can teach people about cool places to visit, hang out, eat and party hard in Barcelona. There are so many, but also so many tourist traps you want to avoid. I also can share some experience about web development, blogging and doing business on the Internet.