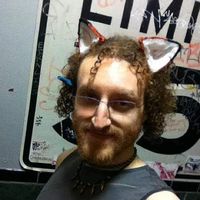 "More ethically substantial than most people," was perhaps one of my favorite compliments I ever received. I'm a former web developer and free software programmer who finally stopped sitting in front of computer screens instead of having actual relationships with human beings, so now I'm an academic with no Academy, a culture hacker with no cultural home, and a busker with no hat. In a word, I'm a "technomad," the information age's equivalent of a wandering minstrel; I travel wherever I'm needed and wanted. Instead of owning a home, I live on the road (and on couches, and on porches, and in tents). I'm grateful to everyone who shares food, shelter, or money with me so that I can continue to do Good Work with Good People for the benefit of our future! :)

At various times in my life, I've been described as "Grade-A adorable," "a perfect blend of geek chic and femme," "a webdev prodigy," "a human database," "an activist heartthrob," "more sticky than a wiki," "an unusual combination of relevant-and-cool," and a "knowledge worker extraordinaire." In other words, if this were the Matrix, I'm "kind of the Red Pill." ;)

If I had a mantra--and I don't--BUT!, if I did have one, it'd be "everything is in everything else." I'm fascinated by people's stories, their lived experiences, and even more than that, the meaning they make of these experiences. I think humans are meaning-making machines, and I think that's beautiful. As a boy, I was often called "anti-social," but that's total rubbish. I'm actually extremely social. I just value different things than many others do during social engagements.

In January 2011, I became homeless/houseless. It sounds bad but it turned into an amazing adventure that saw me hitchhiking and couch-surfing my way across America. I'm always looking forward to upcoming adventures and finding out who I'll meet! (Maybe I'll meet you?) These days I do a lot of house sitting and pet-sitting (I've never met a cat I didn't get along with), so I do a fair bit less CouchSurfing.

I've been kind of a "workaholic" since 2002, when I began involving myself in queer and social justice communities. At the same time, I was starting an Information Technology (IT) career. These interests began growing closer together and before long I was writing culture-hacking code for social justice causes.

These days, writing code for The Revolution is basically all I do. You might call me a technology consultant, or even just a writer (with both human and computer audiences). My projects have included building software to support community seed-saving initiatives, to sexual assault survivor support, and most recently community-based crisis response to replace the "need" to call the police, instead of your friends, for help when you need it. All of these projects (and more!) have made the news, so check out the list of them on my homepage if any sound interesting to you: https://maymay.net/

Since I believe that "everything is connected," I LOVE to "culture hop," moving from one community to another in a never-ending adventure with the purpose of transferring the myriad knowledges human beings accrue from one group of folks to another. This is why I hang out at, for instance, (techie) hackerspaces and talk loudly about prison abolition and restorative justice, and then go right to hanging out in radical activist-land and talk loudly about how cool hackerspaces are. :) I want to learn from, speak with, and rally Makers, DIY enthusiasts, environmentalists, anarchists, entrepreneurs, and as wide a range of more folks I can find to work together for a better tomorrow. (I know that sounds hokey, but when it works, it feels AMAZING to witness!)

To that end, I'm intensely focused on gender justice, food justice, and youth rights. I have occasionally given presentations, lectures, and seminars at university groups, community centers, and other events. During these talks, I focus on queer identity and experience (that is, my own), media and censorship, gender (with a focus on healing from toxic masculinity), technology, and especially the intersection of these things. I've also been a controversial figure in certain circles, challenging contemporary Western/white culture's glorification of various forms of coercion/dominance and I've been interviewed about it numerous times in counter-culture publications (Overland Journal, Filament Magazine), feminist books (Reclaiming the F Word) and academic ethnographic works (Playing on the Edge: Sadomasochism, Risk, and Intimacy).

Since my background is in free software, I draw heavily from the free and open-source software movement, whose principles of transparency, accessibility, and diversity underpin pretty much everything I do. :)

So, how about you?

Over the Spring of 2013, a series of fortunate events (that included a CouchSurfing meetup and a drag show at a gay bar) led to my participation developing the WordPress SeedBank plugin for a permaculture-focused non-profit called The Hummingbird Project. I got quoted in PermacultureNews about the software[0] and now I both maintain it and travel around the country helping community seedbanks and seed libraries set it up for their own use!

I love sharing knowledge about:

Learn: If it's not on the list above, it's probably something I'm interested in at least checking out. :)