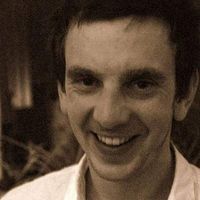 I like learning things, I like thinking and talking and discussing ideas. I like people, and meeting new people, from different places, with different perspectives. In fact, I spend a lot of time looking for different perspectives. Perspective is key to a life well lived and well understood, I reckon. I'm interested in the world, and not just what it can give/do for me. I'm a journalist, or at least was at one point. And a photographer of sorts too.I like drinking, and dancing, and talking through the night. I like art, and films, and music, music, music. And cooking.

I've seen a lot of Europe, spent many months travelling and working through France, Holland, Spain, Germany, Czech, Slovakia, and Hungary. I've been to Ukraine and Belarus and visited Chernobyl. I've tripped down the Dalmatian coast from Split to Dubrovnik in Croatia, and to Sarajevo in Bosnia. I've traversed the Rocky Mountains from Calgary to British Columbia, spent months in Mexico, ate chilli dogs in Los Angeles, and have moved to Montreal, for the moment. But there's always more to see and do... this is good - you wouldn't want to get bored, would you?

"The unexamined life is not worth living for a human being."

I have room for people here, and I've linked up with a lovely lady in Belarus who showed me around. I'm always happy to meet people, offer suggestions or advice on any matters I can help with, or just take people out for a drink.

I spent four months living in a van around Europe in 1999. It wasn't my van, so that was a sort of couch-surfing experience - on wheels.

Everything apart from celebrity news, or pseudospiritual claptrap. Realness, not fakeness.

I love electronic music, techno, hard dancing music, free party music, revolutionary music, punk, DIY. I like 80s goth, 90s indie, Madchester sounds...too, too many to mention. The last two books I read are Life Inc and In Praise of Older Women, make of that what you will.

Munched peyote under the stars in the Mexican desert, Felt the centuries beneath me from the top of a Mayan pyramid, Watched 10,000 ravers do it for themselves on an old soviet airforce base in Czech, Let the Pacific fill my view staring west from Tofino on Vancouver Island, So many other much more mundane things that are still amazing.

I can teach you to cook, although if you can't cook you should be ashamed of yourself!I used to teach IT lessons, and I can mend most computer-related things, or show you how to.I've taken photographs since I was about nine years old, first using a camera that was my father's first camera, that he got from his father in the 1950s. Some things have moved on a bit, but a lot more remains the same as it ever was.