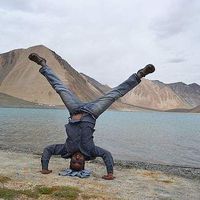 Making people educated about environment, STDs and a disease called soft drinks, specially Coke:), and keep helping the NGOs I am working with in Varanasi

I want to mention something really important before writing anything about myself. I have some serious allergy to dreadlocks. I see it as a disorder of my immune system so please don't think that I disrespect people having dreadlocks. Please forgive me if you also have dreadlocks and want to meet me, we can not meet. But we can definitely talk on couchsurfing. Ask any question you have and I will surely get back to you. Thanks.

Now something about myself:-

I am a Social Research and government approved tourist guide for north India (have a license given by Ministry of Tourism for Government of India) but I prefer working with students and researchers. I do work as tour guide some times when I don't have anything else to do. I love doing research, doesn't matter what kind and what subject. I love watching and filming people, culture and their daily lives. I like volunteering a lot. I volunteer for several organizations including one running movement against Coca-Cola all over the world (http://indiaresource.org/). I have founded two NGOs named Sanjeevani Booti(http://www.booti.org/) and ChanceIndia(http://www.chanceindia.org/). Sanjeevani Booti's aim is to provide information about HIV, AIDS and other sexually transmitted diseases and ChanceIndia's aim is to help poor kids in going to school by finding them sponsorships to sponsor their education.
After all this if you are still interested in knowing more about me then just hit my blog- http://www.groovyganges.org

DON'T DRINK COKE. Shocked why I said this:). Visit the link below

I meet people, invited them at my place or just meet them somewhere, go for a walk or have a meal or drink together either at my place or just somewhere in the town. I help people by answering their questions and queries about my city. My participation in couchsuring is more like building a relationship rather than just meeting people with fake smile over my face. I do not host or show people around as this is how I make my living.

I have always had great experience meeting with new people and sharing ideas with them. I would say couchsurfing is a great idea for getting two cultures come closer.

Cricket, Music, Indian History, Social Work, Research Traveling... Better look at my website and it will answer all of your questions about myself: http://groovyganges.org/about-me/

Indi pop and Kishore Da. I love Eminem. Although I hardly understand wordings of his songs but still love to watch the video:)

July 2012- Traveled to Europe- Hungary, Slovakia and Austria.
June 2012- Was chosen as the lead for NDTV Good Times show called Nirvana Travels.
February 2012- Was given Citizen Journalist Award by CNN for my fight against corruption in tourism industry in India.
August 2011:- Worked with Richard Dawkins and got to talk with him, just awesome experience.
May 2011:- Organized a conference on HIV Vaccine research at the BHU (Banaras Hindu University).
March 2011:-
Worked with a Dutch TV making a travel show for children. Met amazing kids in Varanasi and worked with them.
March 2010:-
Now ChanceIndia is sending over 40 poor kids to the school and I feel so happy to be one of the founders of this NGO.
October 2009:-
I joined a Hungarian NGO (http://www.afroaid.hu/) and we started a child education program in Varanasi to support the education of poor kids. We have chosen 30 kids, 15 in the city and 25 in the village area, and will send them to school from coming March:)
August 2009:-
I passed tour guide exam organized by Ministry of Tourism, Government of India and went through training of four months.
Feb. 2009:-
Made a documentary about sex work and sex workers in India. Did something that India had never seen before- condom usage demonstration in front of 5000 people and gave training to over 2000 sex workers about how to keep themselves safe from STDs and make more money from their clients.
Doing research with students and corporations like MTV Italy, CBC and Financial Times I experienced a lot of new things about society and came to know about the facts that I did not know before. Knowing the reality about Doams and Aghoris was an amazing experience. Mushar society also attracted me a lot, I want to do something for them.
I met one amazing character while working for MTV Italy:-
Lali Baba:- http://picasaweb.google.com/nandanupadhyay/LaliBaba