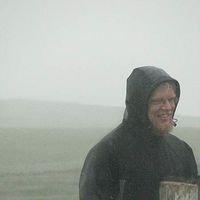 be an ok person to share a planet with

oh well. adores the writings of kurt vonnegut (who is in heaven now), tolerant regarding people's religious beliefs but secretly thinks they would be better off without, likes to play, sing and listen to music, especially jazz, has read more terry pratchett than is good for you, had read LOTR 3 times already before the movie came out, thinks that free software is a nice way of changing the world and a good alternative to the tired old "get rich" ethics of has-beens like mr. gates.

even if it hurts: i'm convinced that when i die, all i'll be is very, very dead. there will be nothing left of myself as an entity, and whatever footsteps i have left on earth will be totally irrelevant to me by then.

karma-based reincarnation is a cool concept, though: i don't believe a word of it, but i can see how it has the potential of making people behave decently, so i try to live as if it existed.

drop me a mail if you need a place to stay. i hope to do the same some day.

see references - it has always been fun, and couchsurfing is certainly one reason not to annihilate the earth to make way for a hyperspace bypass, together with the one-laptop-per-child project and many other oft-overlooked gems of human society and achievement.

likes hiking, sailing and (as of late) free-climbing.
cherishes his vinyl record collection, but also fiddles with an arcane ambisonic surround setup that takes a pile of computer gear to play a single sound..
plays electric fretless bass, nylon string guitar and sings, can operate the piano a little bit.

loved "coffee and cigarettes", "night on earth", "down by law", ... (pretty much everything) by jim jarmusch. i also liked all the kaurismäki films i've seen so far. call me a sissy, but i cried during "hable con ella" by almodovar. but i can also be a tough guy and like the really ugly stuff, like lars von trier and quentin tarantino.

i should compile a ten-records-for-the-solitary-island list one of these days, but haven't got around to doing it yet. sting's mercury falling is probably in, as is dieter ilg's "folk songs" album, and nobody should die before they have heard janis joplin sing "summertime" with that wwwwoow two-part guitar solo in there. not to forget peter o'mara's divine "mirage" album...

the most beautiful book i know is "l'ecume des jours" by boris vian, but vonnegut comes in a close second. lately i've become a great fan of vernor vinge (very good sf writer), and of course everybody reads pratchett, gaiman, neal stevenson and gibson...