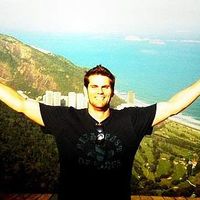 ...to be at last call at the Last Chance Saloon.

My wife and I used to live in Phoenix, Arizona but traded the mountains for the ocean and we are now living in beautiful Downtown Saint Petersburg, Florida.

A computer can beat me at chess, but it is still no match for me at karate.

Filmed a CouchSurfing documentary in Brazil in Sept. 2011. I fell in love with the country and can easily say it was the most enriching traveling experience of my life. Brasileiros, hit me up! Spanish speakers as well, quiero practicar!

One Couch at a Time Movie.
Epic Adventures in Brazil.

San Francisco to New York to Paris to South America. All have been gorgeous experiences. Hosting has been great, too. Come see what's happening in DTSP!

*** HEADS UP: Hosting during weekdays is tough, unless you have a good story :) Weekends are much better.

film/video production, cinema buff, snowboarding, mountaineering, interesting conversation, searching for my next source of inspiration, existentialism, drinking wine and craft beer with beautiful people while unlocking the keys to the universe.

Exit Through the Gift Shop. Amores Perros. Zoolander. Elf (annually). Javier Bardem is one the greatest actors of our day. Hit Girl might be my favorite character of all time.

Spent way too much money in St. Tropez, then walked into the Monte Carlo in Monaco, dressed like James Bond, and won it all back.

Went on a police ride in Passo Fundo, Brazil and challenged my values on criminal rights...it was an amazing, gripping experience. In fact, the whole trip to Brazil was more awesomeness than I can type in one little text box.