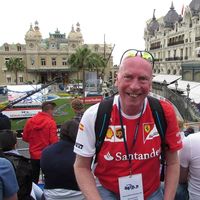 Work as IT Suport Analyst in Glenrothes Fife

Life generally gives you back just about what you throw out there ..

There is not one big cosmic meaning for all,
there is only the meaning we each give to our life,
an individual meaning, an individual plot,
like an individual novel, a book for each person

Was previously City CS Ambassador for Glasgow, Scotland and volunteer on the "New Member Welcome" Team - giving help and information to 1,000's of new sign-ups

Weekends only at present..... sorry but the earliest I can host you would be from Late Friday afternoon / early Friday evening until Early Monday morning at the latest

IMPORTANT !! Tell me something about Kinross, Loch Leven and Mary Queen of Scots (From reading my profile) And SAY MY NAME !! (My actual name)

Surfed many a couch all over Europe a few decades ago before there was a name for it. (Or an Internet, God how old am I ????) Also surfed in USA, Netherlands, UK and Hungary as well as hosting countless people and attending / organizing CS Events

Was pleased to be CS City Ambassador for Glasgow for some time, and was always trying to involve people in CS

I enjoy Cycling and have taken Surfers out with
me around Loch Leven. I live near a Cycle shop however, and he can advise on Bike Rental for longer trips if you haven't brought a bike with you

Please Click on the Bold Highlighted Words below for Cycling Routes near me and use the 'Back' arrows
on your browser or close any new windows to return to this page: (The same goes for all of the highlighted links on my profile)

Cycle Routes near Me include:

Loch Leven and the Heritage Trail which begins right behind my flat as well as the Fife Millenium Cycle-way routes and some national routes in my area:

Burns offered to donate one of his most famous poems Tam O Shanter to a publication by the Kinross poet while Bruce was suffering financial hardship, such was the national poet's admiration of him

If Castles really are your thing, then Kinross is right in the heart of Scotland's Castle country with many magnificent examples in the nearby counties of Fife and Perthshire I LOVE history and nature and will do my best to show you around if I can (work permitting) but you can take off on your own as there's always plenty to see and do

Enjoy many types of music, reading most films

(Usually get to one F1 race per season somewhere)

Eric "Slowhand" Clapton
(Well, I AM learning guitar on a Strat called "Layla")
And YES . . that IS Andy Fairweather-Low on 2nd Guitar . . "Wide Eyed and Legless" Uh Huh

Eric's no "Slowhand" when it comes to Bassplayers either . . .

KJ was the Best improvisational musician who ever lived

The above, James Marshall Hendrix who shares the same middle name as me - and other music that continues to excite, challenge and inspire me :-)

Was Bass Player for 30+ years, the last 10 or so with Roost one of Scotland's top Blues-Rock bands on the UK Festival circuit . . played a tribute gig for Frankie Miller that was a who's who of music with Joe Walsh of the Eagles heading the line up . . also played on the Frankie Miller Tribute album

Have hitch-hiked all over Europe when I was a little bit younger and visited most countries. Often 'Couch Surfed' before there was such a thing.

ALSO . . shook hands with Ladysmith Black Mambazo Lead Vocalist Joseph Shabalala which was just wonderful, especially after being so enthralled by their music and being a proud posessor of Paul Simon's Concert in Central Park DVD

Stories, Laughter, Opinion, Culture, Music - and of course the lovely Kinross and Loch Leven where I live

See the links in my Couch Section . .

I can show you around a little bit of this stunning corner of Scotland. It really is the most gorgeous place imaginable