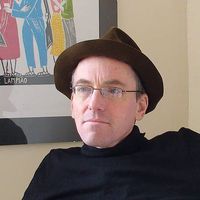 Writing a couple of books, making a big film.

I make documentary films and I distribute radical news for those who don't like the politics of mainstream TV (http://visionon.tv). I've got two sons (10 and 1), and I am currently writing a book on video activism. You can search my partner Takako Yamaguchi. We hold an art movie film club in the flat every fortnight, among other things.

Erm, well OK. I believe that a world which has the resources to give every one of its citizens a good life, but doesn't, is wrong and needs to be changed. That actually may not happen soon, so I'm interested in the meantime to learn about what you think.

We live in pulsating Dalston, just behind the remarkable Ridley Road market, and expect a string of wonderful people to stop by.

All started "some" years ago, as a student hitch-hiking round Europe. I'm part of the "old couchsurfing", before it gained 9 million members and was promoted just as free accommodation. There's really no point in sending us a request if you haven't read my profile or haven't filled out your own in a detailed way. Sometimes I host someone because they've read one book I'm interested in. But please note: it's not about agreeing with me (I have, for instance, very conservative friends), merely that we should be able to have a conversation. The "old couchsurfing" was an ideal internet project, building a peer-to-peer community of affinity and free exchange. Although this sounds a bit serious, in reality we're quite chilled!

Radical politics and current affairs.
Art movies with a capital "A".
Mind-numbingly dull books on musicology.
Singing bass with groups of other singers, large and small (the groups, not the singers).

Slavoj Zizek, the more and more annoying Slovenian philosopher.
Richard Wagner, for his music drama, not his politics.
Any and all poetry.
Long European art movies where nothing happens.
Chico Buarque, genius of the Tropicalia movement in Brazil.
And loads more, but what do you like? I'd like to learn.

Been a major player in stopping the illegal mahogany trade out of Brazil.

I know quite a bit about a number of things, but you wanna a bed, right? I'm lying about the countries I've visited and have lived in, because I don't think you really care. It's just part of the new cs profile. If you'd like to verify me, please read my references.

I've hosted many many fascinating people over the last 9 years. Sometimes I'm really busy, sometimes not so.