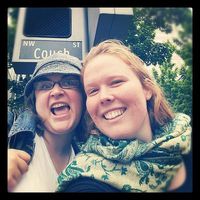 I'm about to undertake a cross-country move driving from Buffalo, NY to San Diego, CA.

I got pretty involved with the CS group in Baltimore in summer 2009. They are an awesome crowd, and Baltimore is a great town - I definitely recommend hooking up with the CSers there if you are in the area. I went to potlucks and parties and bars and dinners, and made some great friends with CS members.

I surfed all over the US and Europe, and I hosted a few times in Bloomington, IN and in Buffalo, NY.

Movies: The only movie I saw that I actually disliked was "Dumb and Dumberer." I don't have high standards for film. I prefer TV usually.

At Catalina Island, off the coast of California during a biology class trip on a tall ship. Jumped in the pitch black water at night, to see our surroundings erupt in a flourish of color - every time you moved your hand or leg, the water lit up with an eerie blue-green glow. This was due to the phosphorescent dinoflagellates living in the ocean, and the high concentration at that period. YAY SCIENCE.

Berlin is one of my favorite cities in the world.

I can play a little ukulele/guitar, sing, and do some salsa/Irish dancing. I'm also pretty awesome at computer and web and social media/communications. I love science and math, and I think I'm pretty good at explaining that to people. I know a little bit about a lot of things. I know a lot of sociology, and especially love Marx/Durkheim/Weber and discussing theory and philosophy.