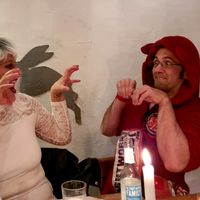 Born in Belgium to a German mother and Turkish father (hence the odd name - Can is pronounced 'Jun'), we moved to the UK three months later. I was educated in England, hence my incongruous posh British accent.

I'm a martial arts guy, in that I enjoy training Brazilian Jiu Jitsu (since 2006, currently a brown belt). I spend way too much time babbling about BJJ over on my site, slideyfoot.com, though that's gotten quieter since I started running my own BJJ club (2014 onwards). I also run regular charity events connected to that, all covered on GrappleThon.org.

I'm keen on art too: a good gallery tends to be the main attraction for me on any holiday, especially if it covers the Northern Renaissance or Mannerism. History is another favourite interest of mine (I can highly recommend Malta for fellow history fans).

I founded Artemis Brazilian Jiu Jitsu Academy in January 2014, which has since become my full time job.

What I love most about Couchsurfing is that you get to experience a place through the eyes of a local, as well as make new friends around the world. I've surfed in Dallas once, again in Leicester, once in Italy, then twice in Belgium. Brilliant experience every time! In addition to that, I've done something similar via other online networks, based around jiu jitsu.

It would be nice to be able to host people myself at some point, so hopefully I can convince the person I live with. ;)

All on Flixster, last.fm and Library Thing: just search for 'slideyfoot' and you'll find me.

Probably that round the world trip in 2004. 12 countries in three months, starting from Hong Kong. In terms of total countries (not that travel is about mere quantity, but it's fun to keep track), at the moment up to about 40 (though I might be forgetting some).

BJJ, naturally, which I teach here in Bristol at Artemis BJJ. I've taught poetry (in an analytical sense) at a university level in the past. Other than that, my German is ok, my Turkish is pretty bad and I'm in the process of learning Spanish.