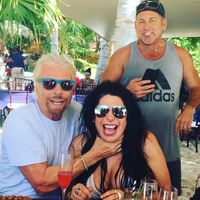 Mancunian travelling around the UK, at the moment.

PHILOSOPHY
Do something that scares the sh*t out of you, every single day.

I've been hosted in the US, Cayman Islands, Canada, New Zealand, Africa and Australia. Can host in Manchester when I'm home.

A fair bit. Have surfed and hosted...several times. Have hosted in Africa and the UK.

I'm a coach and I teach people about the law and civil rights, as well as designing my own clothing brand. Love to travel, but I'll never do a test just to get on a plane. You'll find me in the pub most nights...not just to drink, I love meeting new people (honest!)

The trail to - and finally seeing - Machu Picchu, Peru
Seeing the sunrise behind the Moai on Easter Island
Travelled by land from the bottom of South America to the most northern point of Alaska
Travelled by land from Cairo to Cape Town
Witnessed the natural phenomenon that is bio-luminescence
Camped under the stars in the Namibian desert
Lived in Zanzibar and worked as a tour guide
Lived in Ibiza as a tour guide

I can teach you about the law and your rights.

Drinks and plenty of banter.