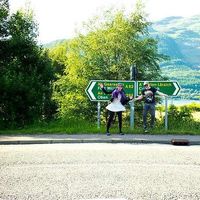 Cheers! To life, to love, to everything!

The sound of..
the sea
night time outdoors
my mum's voice
a can of cider opening
acoustic guitars with steel strings
a Harley Davidson

The smell of..
camp fire
fresh baked bread
my bed when I freshly made it
night
snow
a forest
books

The taste of..
Jack and Coke -not too much coke, not too much ice-
cream cheese and avocado
milk chocolate
stroopwafels
brazil nuts
licorice rolling papers

The feeling of..
Bodyshop body butter
toy animals
friendship
a new book
getting tattooed
daydreaming in my hammock

The sound of..
my alarm clock
the crappy music they play at Carnaval

The view of..
a pile of clean laundry (because I hate putting it away)
Arnold Schwartzenegger in a movie
melting snow

The smell of..
cheap aftershave/perfume
christmas

The feeling of..
flying
being on a boat

What I want (to do) when I grow up
- have a library and a big movie screen
- drive a Harley Davidson
- open up a hostel
- move to Aruba
- NOT grow up! :D

I gave up my Ikea-life (apartment, boyfriend, everything was 'perfect') to go and find myself. I don't know if I really found myself, but I did learn to truly like myself. And I found a home. So this trip has definitely done some good.

I hope to make the world a better place by putting smiles on people's faces. One by one. And the cool thing is.. If you make someone smile, their day will be a TINY bit better than it was before.. And they might smile at someone else, who'll smile at someone else.. Pay it forward!

I was a nomadic ambassador for a few months and was a City Ambassador for London. I was organizing meetings, hosted some people ;), I meet up with travelers and spread the word :)
I was also an ambassador for Tilburg, where I mostly organized parties and moderated the group.

Movies: Amadeus, Amelie, Eternal Sunshine of the Spotless Mind, Crash, Magnolia, Once, Leon, anything by Tim Burton, anything with Tim Robbins or Morgan Freeman (after 10 times I still cry at specific scenes of The Shawshank Redemption), British comedy.. etc

Music: Guitars and real singing. I really like old skool stuff like Queen and even The Beatles, but I enjoy System of a Down as well.

Books: Just about anything. Liked Perfume a lot, read it 4 times now: Twice in Dutch, once in German and once in English.
All time favorite is Blindness. This book shows how easy it is for humans to turn into animals.
Favorite kids' book: The BFG - Roald Dahl. I still read it once in a while.
Funniest book I've read: Round Ireland With a Fridge. Hilarious!

Seen: The sun rise in Dubrovnik on the day that I was leaving this wonderful city. I had made so many friends, had had a great time.. and had to leave. Whilest singing "Blower's daughter", tears were running down my face. Done: Got a tattoo to remember my dad who died when I was 14. It's an angel, on my arm. I'll always miss and remember him, so I hope there's some kind of heaven (with a pub, so we can finally have a beer together).

I would like to learn how to properly play the (acoustic) guitar. I just play a few chords..
And I can teach.. Dutch ;), a bit of veggie cooking..