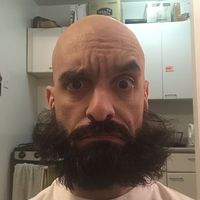 OK, I didn't really grow up in Antarctica (or "no hometown listed" -- Couchsurfing keeps changing it!). I was actually born and raised in New York City. When people tell me how cool that is, I tell them, "Thank you, I chose my parents carefully." :-)

I was educated from places you probably heard of, and along the way I lived for three years at International House (http://www.ihouse-nyc.org), a dormitory for full-time graduate students and young professionals doing internships, where over 75% of the 700 residents are from outside the US. Living there and meeting people from all over the world is what made me want to travel.

After leaving a soul-crushing job in finance, I got my passport stamped for the first time ever in July 2009 -- in Iceland! And then I went crazy to make up for the lack of travel in my life: 3.5 months in Scandinavia and Western Europe, 6.5 months in Asia, 1.5 weeks in Colombia, 65 cities, 24 countries.

During this time, I:
- learned not to be afraid of the unknown
- did a lot of touristic things
- did many more non-touristic things
- learned what a hostel is (really, I didn't know before that!)
- rode the European trains an average of once a week (nearly got stranded in the middle of Czech Republic)
- discovered Couchsurfing
- danced salsa in almost every city I went to
- DJed salsa in: Reykjavik, Oslo, Copenhagen, Berlin, Paris, Prague, Madrid, Bangkok, Bali, Kuala Lumpur, and Shanghai
- lived for 5 months in Malaysia as part of a failed effort to establish myself as a salsa DJ and instructor in Southeast Asia

I returned to NYC in 2010 and made friends from all over the world as a substitute for travel until I left to be an expat again... :-)

In 2015 I traveled again for 4 months: 2 months in Guangzhou, China; 3 weeks in Melbourne, Australia; 3 weeks in Kuala Lumpur, Malaysia; 1 week in Cebu, Philippines. Not as much fun as the 2009-2010 trip (I got arrested and went through dengue fever in Malaysia), but I did get to swim with whale sharks.

In 2016 I traveled again for 2 months: Edinburgh, The Scottish Highlands, Dublin, the Cliffs of Moher, Budapest, Steyregg (a tiny village in Austria), Linz, Puglia (Italy), Malta, Zurich, and Berlin. Country count stands at 34.

In 2017 I went to my first regional "burn" (PEX), and then my second (Gratitude Migration). Yeah, I know they're not really burns. But during those times, I learned to love camping, had amazing times, and made great friends. (Confession: I'm more of a glamper than a burner.)

At first I thought Couchsurfing couldn't possibly be something sensible or even sane, but now that I've been a part of it since August 2009, it is an insanely great community that I love being a part of.

From January 2013 - January 2016, I organized and hosted the NYC Couchsurfing Thursday night weekly meetup, and many other events. In the process I met literally thousands of people from all over the world, and occasionally I hosted.

I've surfed 12 times and hosted about 45 people so far. My experience of Couchsurfing has been awesome, with one minor surfing exception. I hope that you can contribute more awesome experiences. If you want to stay with me, you must tell me how tall you are. Your actual height will not affect my decision, but if you don't tell me, then I'll know that you haven't read my profile very carefully, and your chances will be lower. But... if you are from a country that I like, or from a country that I have not hosted someone from yet, your chances will be better. :-)

The algorithms of Couchsurfing have a good sense of humor -- when CS first implemented "tags" to show you my interests, they automatically generated tags (based on my profile?) such as: makeup, modeling, opera (I really don't understand where those came from, I don't like them, and I didn't mention them anywhere in my profile!), surfing (I've never done this, except for Couchsurfing), swimming (I know how, but don't seek it out), and religion (I lost interest in this many moons ago). I have since removed them.

Here are my interests in my own words:

Note: I am not an alcoholic (I think). I drink mostly in the company of others, and mostly when I am happy. :-)

- karaoke (I actually have a HUGE collection)

- Preferably vegetarian food for reasons of social justice, sustainability, and pollution, but... it's not a religion. I do eat meat.

- Foreign foods, especially typical local foods. I would rather eat nasi lemak in Malaysia than filey mignon in a good restaurant in the US.
- Foreign films: Amelie; The Art of Love; The Lives of Others, Good Bye, Lenin; Shall We Dance; Volver; El Laberinto Del Fauno (Pan's Labyrinth); Ondine; Ong-bak (best martial arts movie ever); Shall We Dance?
- Foreign people, especially Couchsurfers

- Theater: I've seen The Book of Mormon, Wicked (5x), Matilda, Les Miserables, Holler If Ya Hear Me, Motown, In The Heights (2x), The Lion King, Ragtime, Chicago, Mary Poppins, Avenue Q (2x), The Addams Family, Cabaret, Phantom of the Opera, Billy Elliot, Hair, Rent (2x), Baby It's You, Bullets Over Broadway, Memphis, Stomp, Blue Man Group, Guys and Dolls (which I also performed in when I was a kid), and probably a few others that I've forgotten...

- Movies of all types (yes, even chick flicks), particularly foreign ones where I have to read subtitles (see above). But definitely *not* horror.

Movies (American): The Princess Bride; Up; Thank You For Smoking; Office Space; Gladiator, The Secret Life of Walter Mitty; The Art of Loving: Story of Michalina.

Movies (Foreign): Amelie; Shall We Dance; Volver; The Lives of Others; El Labyrinto Del Fauno; District 9.

Books: One Hundred Years of Solitude; The Girl With The Dragon Tattoo; Like Water For Chocolate; The Kite Runner; Wicked. Last book I read: A House for Mr Biswas (that was a depressing book).

Music:
- Salsa music -- FANIA, El Gran Combo, Sonora Ponceña, Hector Lavoe, essentially New York and Puerto Rican style salsa from the 1970s, also called "The Golden Age" (I rarely go out dancing any more, but I could be convinced)
- Cheesy (by which I mean awesome) music from the 1980s
- some Top 40 music through all the decades (it's popular for a reason, right?)
- good music that you expose me to

Iceland, July 2009: Got my passport stamped for the first time. Also, I drank water from a puddle on a glacier in Iceland.

Malaysia, May 2015: I went to a bar for a night of salsa dancing and ended up getting arrested and spending 5 hours in detention.

Malaysia, May 2015: I survived dengue fever, which started 2 days after getting arrested.

(In spite of the "amazing" things above, I still recommend Malaysia as a place to visit.)

Philippines, May 2015: after recovering from dengue fever, I visited Oslob and swam with whale sharks: https://goo.gl/photos/wj5riprxNgPTnRZW6

In July of 2015, I was a model in the 2nd annual NYC Bodypainting Day: https://goo.gl/photos/XziXMxLqTKjhT1z97 (caution, NSFW! (not safe for work, you will see photos of naked people, including me))

In July of 2016, I was a model in the 3rd annual NYC Bodypainting Day: https://goo.gl/photos/Y1RwcVDEor3qNENt8 (also NSFW!)

I have not done a Bodypainting Day since then. :/

Have you noticed that hardly anyone writes just *one* amazing thing they've done in this section... including me. ;-)

I can teach English (I am an expert in grammar and usage, and taught English as a Second Language for a semester). Seriously, if you have questions about either the basics or the finer points of English, I'm your guy.

In bursts, I try to learn French using Duolingo and Rosetta Stone.

I know how to say the word "cheers" in as many languages as possible. I'm up to about 21, and always appreciate learning another.

I am not sure why they have this section. I am sure you can choose a thing or three from the rest of my profile. ;-)