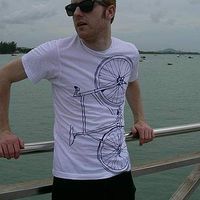 Find myself a new direction there

I'm a computer engineer, I'm vegan, and I'm really into bikes and dumpster diving. I don't exactly love sprouts, but I do love sprouting them. I've been vegan for over seventeen years; it actually started as a joke, but ended up being a good idea so I stuck with it and consider it the best decision I've ever made. I love studying languages and in another universe I would've majored in linguistics or applied mathematics... maybe I still will. I speak French and a little bit of Chinese and Swedish and a lot of other nonsense, and do computational linguistic research and development. I love to cook, bake, et cetera.

I've lived in Amsterdam and Stockholm, then hitchhiked from Sweden to India, originally destined for Vietnam but got a bit weary of travel and decided to take a break and settle temporarily in Australia. After spending a bit longer doing that than expected, I got back on the (silk) road and lived in Thailand and Taiwan. Now I'm stuck back in New York but always planning my escape...

Hitchhiked from Sweden to India. Biked from Budapest to Rome.

I'd love to find anyone that wants to help me practice my Mandarin, Swedish, or French. Or Spanish, or Thai, or whatever else you got.

Or someone who can help me sew better, or be more crafty in general. And anyone who likes experimental cooking together - right now I'm really interested in learning how to make raw nutmeat cheeses/patés (as well as my usual fascination with Indian and Asian foods).

I can teach you computer crapola, biking skills, English, how to juggle, vegan cooking/baking...