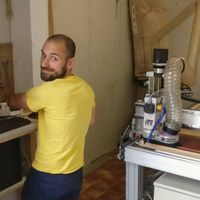 I'm a night owl, build software for work and love it. Aside from that I'm into techno and deephouse music, traveling around (which is part of why I don't like to plan ahead multiple weeks for CS hosting) and making furniture (using CNC milling).

I'm also gay, so if you're a raging homophobe, please stay away. There won't be any flirting, so whether you're female / male / straight / gay / anything else, don't fret!

I have quite a bit of experience with CS over many years, as a host and surfer, and love this community. It has really opened up the world to me and allowed me to travel more and for longer, while meeting fun people, some of whom have become good friends.

Funny — every time someone asks you a question like that, you can’t remember a thing. But there were and will be plenty!