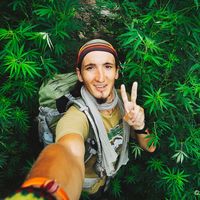 I am an easy-going young freelance photographer.

I'd like to think that I'm quite funny, friendly, happy, optimist, adventurous, respectful, empathetic
At the moment I want to travel a bit, discover different cultures and share about my own culture. To then one day decide where we want to stay.
I take life as it comes, every day is a new experience, try to make the best out of it.
I grew up next to a National Parc called "Marais Poitevin" where I was a boat guide during the summer.
I love nature and all the simple things of life.
But what I enjoy the most at the moment is meeting new awesome people. I got addicted to these spontaneous experience where you get very friendly relationships from people you've just met and who would give you lots without expecting anything but a thank you in return.
I studied in La Rochelle which was such an amazing city.
Then I studied 3 years in England, where I learned a lot and met so many good people.
When I finished my studies, I toured Europe on my own for 6 months. After that with my girlfriend we left to do a tour of the world.

Rock'n'roll is a good philosophy.
"One Love" by Bob Marley is good as well.

Now I am travelling so I mostly surf but whenever I have a home I host as well :)

Since I discovered CS, I've made it my lifestyle.
I simply love the spirit and all the good people I've met thanks to CS.

I'm a music freak ! I have a huge, nicely sorted music library. I love to discover new music. I can mostly appreciate any music as long as I can get someone who can show me what's so good about that music.

Don't be afraid by the extensive list of Metal bands with funny names. Metal is really not what people think it is. It's just a bunch of happy, very funny, well behaved people who like intense music.

You can see all the songs I have been listening since 2009 on my Last.fm account:

I love Sport. When I was younger I played Handball. Then I did a bit of Martial Arts. Started by Taekwondo, then Kung-Fu and Kick-Boxing.
Now I have been playing Rugby for 2 years.
And I like running and mountain biking.
Since I have arrived in Sayulita in Mexico, I now love surfing.

I love photography. I do portraits, landscape, street photography, concerts. I try to hunt the spontaneous moments and the real smiles. You can go check my Flickr

I'm not a big reader.
But I like movies and Series.
Once again this would be a very long list, so I'll make it short.

Movies: 300, Avatar, The Shawshank Redemption, Batman, Iron Man, My Name is Khan, Invictus, This Is Spinal Tap, L'auberge Espagnole, Tenacious D the pick of destiny, This Is England, The Lord of The Rings, Star Wars, BraveHeart, Saving Private Ryan, The Green Mile, The Last Samurai, The Fifth Element, Pulp Fiction

- At Festa Gracia 2012 in Barcelona, after running under the fire (Correfoc). I found myself at the concert from Txarango. The square was packed full of people. I struggled to get to the middle of the pit. At the last song , There was a girl who seemed to want to croudsurf or something... She ended up climbing on me. Then everybody joined to support the Castel. And then another girl climbed on top ! When she got there, she waved an independentist Catalan flag. Everybody was so excited to see this ! It was awesome ! Such an amazing moment.
- Walked 100km in 28hours for charity (Oxfam Trailwalker France 2013)
- Ran every single day of August 2013 to raise money to help protect the orangutans. Ran between 10 to 21kms, finished with my first marathon and totalised 480kms in 31days.

I'm quite good with computers (Mac and pc) and most kinds of electronic gadgets (when I was studying in La Rochelle, I used to work as a home computer assistant)
I play the guitar, so I can teach a bit.
I can help in English or French
I'm good at making websites, but It'd take a while to teach.

I love to eat and drink. I'm not an amazing cook, but I'm good at making few simple things.

I'd love to learn about so many things.