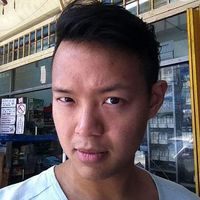 Live life to the fullest. Seize the opportunity when you have it because you never know if it will ever pass you by again.

I first began couchsurfing most of my way in America and Europe in Dec08-Feb09. The following year in Jan09-Feb10, I couchsurfed with the friends (whom I met a year earlier) in parts of Eastern Europe.
In Feb-Mar 2011 I was in South America and had a really great couchsurfing experience there too.
Being based back in Malaysia from 2011-2013, I started hosting my first guests as well as continued on surfing in various countries around Asia.
Throughout all those times I have discovered so much about people and their cultures life which gave me a greater appreciation for my own roots and upbringing. I am always willing to share a part of me even as I learn from others.

These are couches I've surfed unless stated otherwise:

Jazzy, soul, and acoustic music does it for me.

Exmouth, Western Australia: I swam alongside whale sharks!
Argentina: Perito Moreno glacier was quite a sight to behold and Iguassu Falls was just roooarrrr!
Edinburgh: Joined in thousands singing Auld Lang Syne as the clock struck midnight on NYE2010
Whitsundays (Queensland, Australia): Survived a 3-day sailing adventure to the Great Barrier Reef with no air conditioning or showers (only the 1st day)
Sydney: Skydived from high up in the sky and explored deep into the canyons of Blue Mountains.
San Diego: Get pummeled multipled times by the waves of the Pacific Ocean
I know this ain't the most amazing things but at least I tried to think of something!

I want to learn how to enjoy travel without it being a chore. Somehow I look at it as an art and I admire those who can just say 'screw the detailed planning, let's just go and see where fate takes me'.
Edit: Although I have progressed from the point when I first wrote this, I am still learning. But I must say I am starting to love traveling.