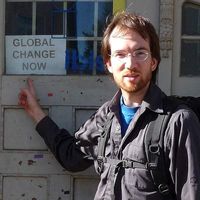 Finding out about money and improving the system for the benefit of all.

I've travelled and studied quite a bit, but I'm eager to learn more. I found out that vegetarian restaurants and cafés can be great places to meet interesting and like-minded people.

“Hope, in con­trast to op­ti­mism, is not the ex­pec­ta­tion of a happy end­ing, but the com­mit­ment in the cer­tain­ty of the ac­tion mak­ing sense, no mat­ter how it ends.”
Vá­clav Havel (my trans­la­tion from a Ger­man magazine)

I offer my couch, and I found couches via couchsurfing.org.

So far my Couchsurfing experiences were mostly as a guest, in Nijmegen (where I then lived) and in Eberswalde. In Nijmegen I also attended the "monthly meeting" several times. All these were quite positive experiences.

Currently I'm mostly interested in this money issue, but certainly not because I'm after the money! It's just that you need some to survive, and finding someone who pays you is astonishingly difficult these days...
http://www.vlado-do.de/money/

I do have other interests though, quite a few actually. I sang in a choir, I sometimes play guitar, I'm an enthusiastic user of free software, I go to a juggling group, I love cycling...

All Stanley Kubrick films, most music that rrr.org.au plays (and also the John Butler Trio, although they don't seem to play them much), mostly classic books like 1984 or Brave New World...

After finishing my degree I went on a four-months trip halfway around the world, starting with a train ride from Dortmund to Istanbul.

I'm not a great juggler, still trying to keep five balls in the air for more than seven throws, but I can teach the basics.

I'd like to learn some more Turkish, and to get to speak French again from time to time.