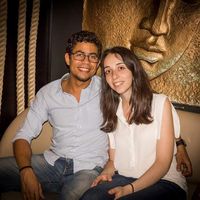 I'm from Cape Verde, but happened to be born in Russia, and now live in Portugal as a PhD student on computer-generated holograms.

I'm an avid learner and have spent more hours than I could count on Wikipedia, both as a reader and as an editor. I'm also quite fond of technology, especially futuristic stuff like self-driving cars and virtual reality.

Although I'm not exactly a party animal, I tend to be quite easygoing and make friends easily. I drink, but don't smoke. If I have the time I'll gladly show you around the city, but if I don't, I'll at least try to spend some time with you so we can get to know each other. For me that's the best part of the couchsurfing experience, and easily the source of the fondest memories I've made both as a guest and as a host :)

I really like the concept of couchsurfing, which I consider part of the true sharing culture (rather than the so-called "sharing" economy, which is really more of a decentralized market). It's a wonderful global movement made possible by the Internet, and that promotes trust, mutual understanding and empathy among people from all over the world.

I have both hosted and surfed, and also participated in some local CS meetings. All of these have been very rewarding experiences, I might add! And any chance I get, I recommend this to people who haven't tried it yet :)

One of the people I successfully convinced to try out couchsurfing a few years ago was my girlfriend Cátia (https://www.couchsurfing.com/people/catiaritaferreira). We are now able to host other travelers in our apartment, and are looking forward to it!